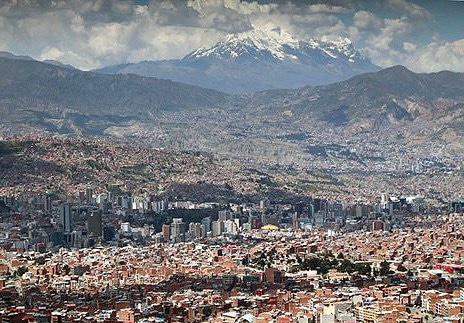 Little by little, daily conversations cease to be about the months of the coup and begin to open up to what is ahead of us. The country is calm, there are no soldiers in the streets, La Paz is back to everyday-normal, with the presence of the snowy summits of Illimani – a word meaning dazzling in Aymara – and the aerial tramway that crosses the city, arriving all the way to El Alto, the gateway to the Altiplano.

There is still news about those who were at the head of the de facto coup government. Along with Arturo Murillo and Fernando Lopez – ex-Ministers of Government and Defense, respectively – fleeing the country, we also learn of Javier Issa doing the same. Issa, who was head of the Ministry of the Interior, left Bolivia on November 9, headed for Miami, according to the national director of Interpol.

There is also new information about one of the central institutions active in the coup: the National Police. Carlos Romero, who was a government minister up to the time of the overthrow and who was later arrested and imprisoned, stated that he has a list of “police chiefs who organized and directed the police mutiny”, particularly in the city of Cochabamba, one of the critical points during the days of the siege.

According to Romero, during the mutiny in Cochabamba, 92 weapons disappeared, which, according to the “hypothesis of police circles,” ended up in the hands of snipers who used them to shoot people in the massacre of Sacaba on November 15, 2019. The ex-minister also noted that the police “were never aligned with the MAS Party” because they had taken away business dealings worth millions, and “the police hierarchy were awaiting any political circumstance in which the MAS no longer had control of power to conspire against them, and that situation occurred on October 20 of last year.”

Romero also referred to 300 people, among private businessmen, who donated money to the coup, some as much as $200,000, with a total of “several million dollars.” This last statement was countered by rightist coup monger Luis Fernando Camacho, who declared that he had entirely financed these actions, in a statement intended to maintain himself as the principal head of the 2019 actions, while disputes are swirling among elements of the right wing in Santa Cruz.

The internal divisions among the Sant Cruz right wing are kept “in-house” while the political organizations, such as the Civic Committee and Unión Juvenil Cruceña (Santa Cruz Youth Union), work out the process of reorganization to determine which sector will take over the reins and what strategy they will employ in this new era.

This reorganization of the right shows us something quite clearly and that is one epoch has ended, with the defeat of the coup. One of the questions is how to redirect the whole of the country into the channels of dialogue, of coexistence, and of democracy. This is a complex question at every level, in the police and the armed forces as well as with the right-wing political protagonists, business interests, in the whole society, among different regions, and within the cities.

The rise of the coup as well as the months of the de facto government, exposed the depths of the historical divisions in Bolivia. During that time we saw scenes of aggression toward women wearing traditional dress – because they were Aymara or Quechua women – and toward people who were of the MAS Party, or just appeared to be expressions of colonial contempt, as well as the fantasies of the middle and upper classes of La Paz, who armed themselves behind barricades, with the possibility of an uprising in El Alto spreading downhill to the center of the city.

The coup opened up a Pandora’s Box of hatreds, showing that something thought to be left behind in the past had only been contained. How to reduce this deep divide? Is there an aspect that is inevitably irreconcilable? The process of change, the proposal of a pluri-national country and government, achieved advances that the coup put into question.

On the other side – in El Alto, for example, a great politicization of the very young who had not known coup or right-wing governments transpired with a demand for justice for the massacres, like those of Senkata and Sacaba, an uplifting of the Whipala, a renewed political power that, in part, explains the 55.1% that the MAS Party achieved in the October 18 elections.

The process of change has been strengthened. The offensive actions against the Whipala by the police and the de facto government, the persecutions, militarization of public spaces, televised threats and intimidation and humiliations – all these reaffirmed identities, political views and participation. Now is the time of internal reorganization among the different parts that make up the process, considering the role of each leadership body, of the movements, the organizations, the political resources, parliamentary representation, the executive branch, and the correction of errors.

The times are returning to normal ways after a year that left a deep mark on the lives of millions of people. What do the majority of the people, and especially those who voted for the MAS Party, expect? Economic and political stabilization, more profound changes. For the first objective, one of the measures confirmed by the Luis Arce government will be a permanent tax on large fortunes.

The new era in Bolivia represents an opportunity for the process of change that managed to return to political power even under fire. The country can take a moment to breathe, La Paz is that city built among mountains and summits, at the foot of El Alto with its markets, businesses, webs of organizations, Aymara knowledge, the immensity of the Andes.