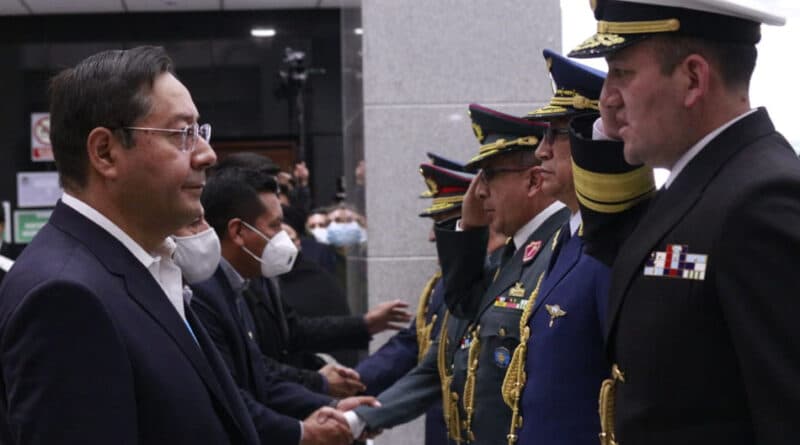 The president of Bolivia, Luis Arce, swore in the new high command of the Armed Forces last Monday, in a ceremony carried out in the Casa Grande del Pueblo (headquarters of the executive).

Based on his prerogatives as Chief of State and Captain General of the Army, Arce appointed Brigadier Generals Jaime Alberto Zabala and Miguel Ángel Contreras, Commander-in-Chief of the military institution, and Chief of General Staff, respectively.

The president also assigned Brigadier Generals Fuad Genaro Ramos and César Moises Vallejo, and Rear Admiral Javier Torrijo, to the head of the Army, Air Force, and Navy, in that order.

The new positions will accompany Arce’s management at the head of the different components of the Armed Forces, highly criticized by the majority of Bolivians for its complicity with the coup that forced President Evo Morales to resign in November 2019.

The actions of the military under the orders of the subsequent de facto government caused their rejection and repudiation by the people. The military’s participation in the repression of peaceful demonstrations, and their role in the Senkata and Sacaba massacres, which left some thirty dead and dozens injured, was considered damning.

The aforementioned facts are being investigated by the Bolivian parliament, which  is still seeking justice a year after the events. However, there have been concerns that the military is obstructing the investigations.

This hypothesis is supported by the Ombudsman’s Office, which called on the military not to obstruct justice. The investigation seeks to determine the accountability of several high-ranking officers and the former ministers of Defense and Government, Fernando López and Arturo Murillo, respectively.