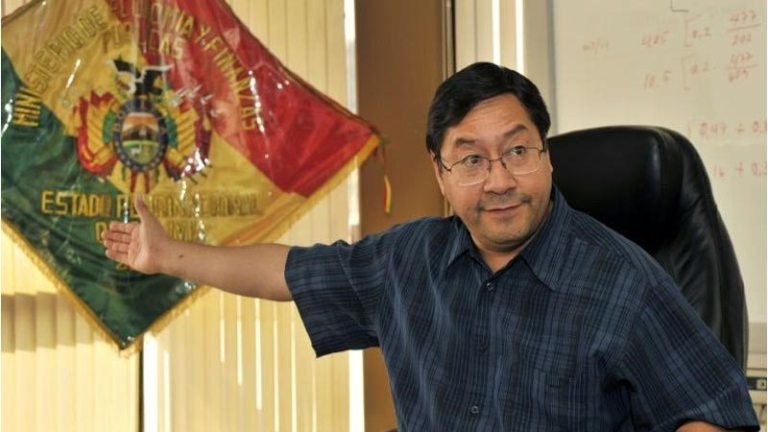 The United States imperialist offensive against the people in Latin America and the Caribbean is beginning a new phase—showing clear fascist tendencies in some countries. Though this is not the only symptom, a clear example of it is the U.S. obsessive effort to starve to death and cause death due to insalubrity to the Venezuelan and Cuban people just for the sake of hindering their sacred human right to self-determination. Another example is the cynical and crazy “anti-terrorist” crusade through Latin America convened last week in Bogota by State Secretary Mike Pompeo and Colombia’s sub president Ivan Duque, shaking hands with their puppet Juan Guaido.

Precisely due to such a hostile context, nominating Luis Arce and David Choquehuanca as candidates to President and Vice-President of Bolivia by the Movement for Socialism (MAS) in the elections next May 3rd gains greater political relevance.

Evo Morales fostered their nomination in a crowded meeting in Argentina with members of the MAS party and representatives of the Pact of Unity signed by Bolivian social movements. They initially proposed Choquehuanca as President and young cocalero leader Andronico Rodriguez as vice-president but they then agreed with Evo’s intelligent reasoning in the pursuit of more unity, representativeness, and electoral efficiency.

The goal is to win in the first round just as they did last October 20th, which was cut short by the never proven alleged fraud by the Organization of American States (OAS). Morales explained that the Arce-Choquehuanca electoral ticket achieves unity between peasants and the city, unity between scientific knowledge and the millenary indigenous world. He stressed that Arce ensures the economy because he was a minister in this field under Evo’s for three administrations, except for a short period. Doubtlessly, Arce is responsible for the successful economic model that enabled Bolivia not only to grow economically above the rest of the Latin American and Caribbean countries but also to take millions of citizens out of poverty and extreme poverty. Since very young, Arce was a militant with the of distinguished leader Marcelo Quiroga Santa Cruz’s Socialist Party-1. His first readings on the economy were not in college classrooms but in Marxist theory study circles. Besides that, he got a bachelor’s degree and a master’s degree in economics at the University of Warwick in the United Kingdom. As a university professor, he worked on Morales’ first electoral campaign in 2005; he joined Morales’ first Administration as soon as he was elected; and shortly after he assumed the position of Minister of the Economy continuously for almost 14 years.

In turn, David Choquehuanca is one of Evo’s closest friends since the latter led the cocaleros in the Cochabamba tropical lowlands; he also boosted student struggles and Marxist study groups since he was very young; meanwhile, he gained prestige as an advisor to peasant unions and took postgraduate studies in anthropology and history, as well as in the rights of native populations in the Bolivian universities of San Andres and The Cordilleras. He was Evo’s Foreign Minister for 11 years. Choquehuanca thebn served as secretary to the Bolivarian Alliance for the Peoples of Our America (ALBA) and has been promoting the rights of Mother Earth and the native people’s cosmogony.

The moral, political, intellectual and humane superiority of this pair is evident when compared to the variety of opposition candidates they will face like Santa Cruz province neo-fascist Luis Fernando Camacho; neoliberal Carlos Mesa; the U.S. super puppet Tuto Quiroga, and others of the kind. Apparently, the self-proclaimed President wants to be a candidate too. But those people are nothing.

What is going to be very difficult, not only for Arce and Choquehuanca but for any MAS candidate is to run for elections in a militarized country, recently overcoming two massacres; with a political persecution regime against those who think different, such as a large number of MAS militants, activists, or natives, all of them persecuted, imprisoned, and more than a few cases given cruel, inhuman and degrading treatments, such as former Cabinet Minister Carlos Romero. Moreover, the media is completely serving the right-wing and the international media has been given their orders to vilify MAS. Meanwhile, important MAS government officials are sheltering themselves as refugees in Mexico’s embassy to La Paz, without having the possibility of leaving the country. MAS would win elections today according to all surveys. But the big question is if the alleged provisional government, whose only function was to pacify and control the country, is willing to give power back to the “savages,” as Mrs. Jeannine Añez called them, in case they win. This is not a meaningless question as Bolivia’s dictatorship has unleashed racism; took an abrupt turn on foreign policy—now completely subordinated to the United States; placed public companies in hands of friends and relatives, and it’s acting as if they are going to stay around for a thousand years.