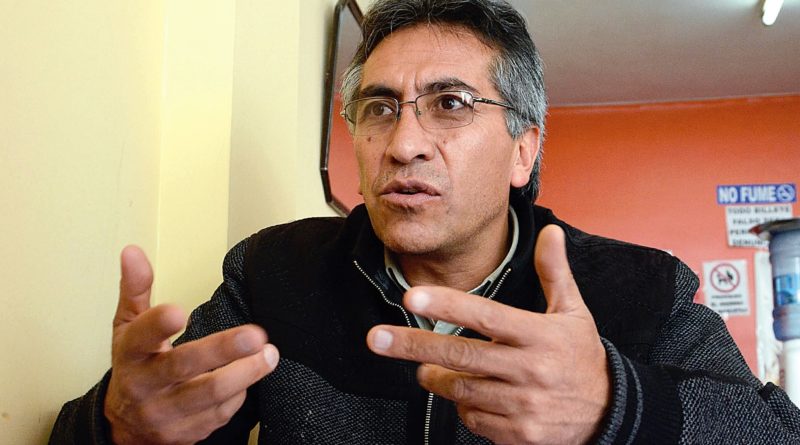 In Bolivia you have to be careful what you say and do, if you don’t want a judge to accuse you of “sedition and terrorism” and put you behind bars. This was the case with Argentine and Venezuelan journalists who visited the country to report on the massacres. But the accusation is also directed at those whom the media have targeted. This is the case of former deputy minister of government and current member of the Assembly, Gustavo Torrico who, through a Paris-La Paz contact, practically takes his imminent arrest for granted.

Indeed, since the coup d’état of 10 November, events have taken on a whirlwind character that takes everything in its stride. The regime relies on a machinery of media propaganda, combined with judicial actions of preventive detention, against anyone who has been part of the government of Evo Morales. In 14 years of a process of change with broad popular support, the list can be long… And the Añez regime does not rest during the Christmas holiday period.

RELATED CONTENT: Bolivian Electoral Tribunal Confirms the Authorization of MAS Party to Run in Next Elections

The accusations of “sedition, terrorism and the financing of terrorism” against Evo Morales, the Minister of the Presidency Juan Ramón Quintana and the La Paz assemblyman Gustavo Torrico are based on statements taken out of context. The IACHR declared that in Bolivia “there is no guarantee of judicial independence. That is why it is necessary to hear the voices from Bolivia that explain to us what social and political evolution have occurred since the coup.

Alex Anfruns : How did you personally experience the coup d’état?

Gustavo Torrico : It was a traumatic moment after the police riot, which removed the guard from Plaza Murillo, leaving the center of power unprotected, as well as the Palace and the headquarters of the Plurinational Assembly, which until Friday were guarded on the perimeter by the police. Inside were the social movements that support the government of President Morales. Already informed that the riot would occur, and in order to avoid a confrontation between two groups of civilians with catastrophic results, the President ordered the withdrawal of his supporters. The day before, the Armed Forces, which announced that they had total control of the rebellion, “suggested” the resignation of the president.

There were multiple threats and aggressions against members of his party and representatives of the institutions. Who were the main actors?

True, there was a hunt for social leaders and a search for political leaders. The most emblematic case is that of Gerardo Garcia, the current vice president of MAS who was sent to San Pedro prison under the fashionable charges of “sedition, terrorism and financing of terrorism”.

The paradoxical thing about this was that paramilitary groups shielded in “resistance” committees and with police protection were the main operators of the vexations against every citizen with indigenous characteristics, calling them masistas. The same happened with the Armed Forces, which allowed these paramilitaries to act as a spearhead in their operations

What political activity have the MAS assembly members been engaged in during the last month and a half in this unusual situation?

The majority of the Assembly members have had an attitude that is too submissive to the force deployed by the paramilitary groups, which to this day stand at the doors of the Assembly to physically and verbally attack them. They act under the protection of the police forces, who turn a blind eye to these atrocities. Moreover, they allow them to enter the premises.

Can you cite the most significant changes made by the Añez government?

Despite the constitutional mandate that limits them to only being authorized to call elections, they dedicated themselves to taking over the state apparatus as if they were an elected government to serve an entire period. They have resumed relations with the Zionist government of Israel, as well as with the United States and an exchange of ambassadors. They have expelled the Cuban doctors who were collaborating in that field. On the other hand, they have tried to portray Evo’s government as if it had been the worst thing that happened to the country.

There has been harassment against people who denounce the coup, even affecting the work of journalists and the Ombudsman’s Office. What can you tell us about the climate of political persecution in your country?

Speaking or expressing phrases such as coup d’état, usurpation of power etc. are directly classified as “sedition or terrorism”. TeleSUR and RT were erased from the ether, as were more than 57 community radio stations, establishing almost a single radio and television channel, in which MAS members have almost no participation.

Our representatives are crucified before they even get to court. State offices are violated by paramilitaries with police protection, to force officials and authorities to resign. Any person who has been an official from the secretariats or accompanying personnel is detained…

The media have unleashed an aggressive campaign against him. What is he specifically accused of and what context do the facts or statements refer to?

The newspaper El Diario placed a headline that reads “Torrico threatens to kill young people” intentionally decontextualizing an appearance by me on a television radio program called “Polémica”, where I made a reflection to parents to take care of their sons and daughters who were confronting the police. This was viralized in all the media without any of them asking for the counterpart or a clarification from me. This is the product of the intentional handling of the press, which is the reason why I am being persecuted and accused of “sedition terrorism and financing terrorism”…

For my part, I made my appearance before the prosecutor’s office on Monday, December 23, indicating my home address and procedural address, but the prosecutor did not deign to consider it. Instead, he issued a summons to a strange building in another neighbourhood and therefore it was unknown to me. Now the prosecutor stated that he issued an arrest warrant against me without considering that as an Assemblyman I enjoy a state of inviolability: I cannot be arrested or criminally prosecuted for my statements, opinions, etc. during my term of office and not even after the same Article 151 and 152 of the Political Constitution of the State.

Taking into account the current situation, how do you evaluate the possibility of new elections in Bolivia?

Personally, I believe that they are not interested in holding elections with an MAS that is strengthened. So there are two ways left for them to continue in this eagerness to usurp power from the people and to implant Neoliberalism again.

The first is to try to remove the acronym to eliminate our legal status, which they know would have dire consequences. And if this were not the case, when they finally arrive and feel defeated, the second is to attempt to ignore the results, returning to their original plan which is the balkanization of the State.