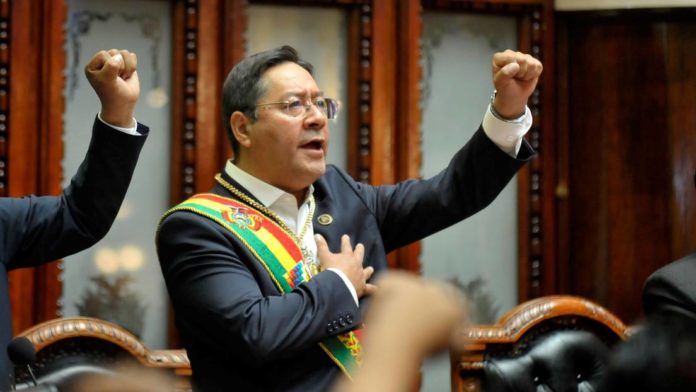 A little less than two years after the coup against Evo Morales in the Plurinational State of Bolivia, political and social movements are concerned that a new conspiracy is afoot, led by sectors of the right, to overthrow the current President Luis Arce.

As a result, a spokesperson for the Union Federation of Mining Workers of Bolivia stated that labor organizations remain on alert, and expressed their willingness to counter any attempt to undermine the stability and peace of the highland nation.

The pronouncement was made by union leader Gonzalo Quispe, who participated in a joint press conference with representatives of 14 other social movements, labor organizations, and federations that make up the Bolivian progressive forces.

Similarly, statements were made by a spokesperson of the Confederación de Mujeres Campesinas (Confederation of Peasant Women), Flora Aguilar: “To the fascist coup plotters, who say they have strategies to overthrow governments, we tell them here and now that the social movements are not going to allow it.”

Even the Indigenous leader Evo Morales had previously expressed his concern with plans that are evidently in progress, aimed at removing President Luis “Lucho” Arce from power, whom the Bolivian people elected in October 2020 with an overwhelming 55.1% of votes cast. Arce’s closest contender, the right-wing politician Carlos Mesa, only obtained 28.8% of the vote.

Right wing on the prowl
Faced with this scenario, Evo Morales has been consistent in his accusations of sectors of the extreme right, who attempt to divide the revolutionary forces of Bolivia and carry out a campaign against Lucho Arce by trying to sow false rumors about Vice President David Choquehuanca.

RELATED CONTENT: Bolivia will Send Food and Syringes to Cuba

Likewise, in defending the current administration, Evo Morales added that Bolivian women and men were not mistaken when they elected Luis Arce as president, with whom the country has progressed in the recovery of the economy, destroyed by the coup and the pandemic.

“Rebuilding the redistribution of resources: it is estimated that growth will be more than 5%, and even at 4% it is already a total success,” wrote Morales recently on social media.

With all this, the ghosts of the recent period that Bolivians lived through, during the coup that installed Jeanine Añez in 2019, continue to haunt the nation. In that case, there were complaints about interference by governments of other countries and by the Organization of American States (OAS) led by Luis Almagro, which supported the conspiracy that took Morales out of power.

For these reasons, today there are investigations regarding the relationships that leaders such as Ecuador’s Lenín Moreno or Argentina’s Mauricio Macri had with the coup conspirators. Recently, evidence came to light connecting these former presidents with shipments of weapons and supplies used by the dictatorship of Jeanine Añez to repress the Bolivian people.