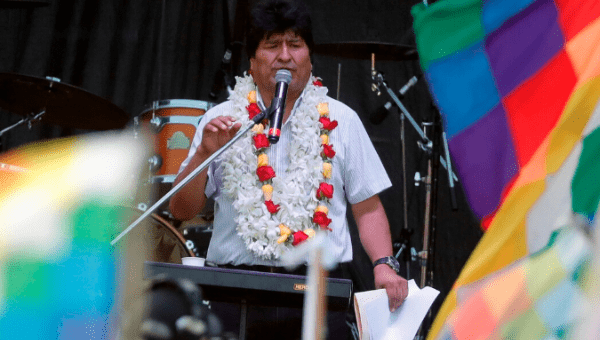 Bolivia’s electoral body said that former president Evo Morales was ineligible to run for a senate position in the upcoming May 3 elections.

The president of the Supreme Electoral Court of Bolivia (TSE) Salvador Romero reported that the former President Evo Morales will not be able to participate in the 2020 general elections, which will be held on May 3.

During a press conference, Romero told reporters that Morales did not meet the permanent residency requirements to be a Senate candidate for his Movement Toward Socialism (MAS) party, which is currently leading in the polls.

The candidacy of former Chancellor Diego Pary, as the candidate of the MAS party for senator in the Potosi region, was also disqualified on the same grounds.

However, the electoral body dismissed the observations against the presidential candidate by MAS party Luis Arce and enabled his candidacy.

Morales on his Twitter account wrote that the decision taken by the TSE was “a blow against democracy.”

RELATED CONTENT: Bolivia: An Election in the Midst of an Ongoing Coup

“The decision of the Supreme Electoral Court is a blow against democracy. The members of the TSE know that I meet all the requirements to be a candidate. The ultimate goal is the proscription of MAS.”

The sentence of the Bolivian electoral body comes two days after the MAS party declared itself in a “state of emergency,” due to the alleged political attempt of “embedded sectors” in the body to “eliminate” its candidates on behalf of interests that they described as “undemocratic.”

Meanwhile, Arce, who was Minister of Economy and Finance during the Morales administration, is the favorite to win the presidency according to the most recent poll by the research firm Ciesmori. Arce leads the vote with 31.6%, followed by former president Carlos Mesa with 17.1%, de-facto president Jeanine Añez with 16.5% and Luis Camacho with 9.6%.

Featured image: Former President of Bolivia, Evo Morales speaks to thousands of people during the celebrations of the Plurinational Day of Bolivia on Jan.22, 2020. | Photo: EFE