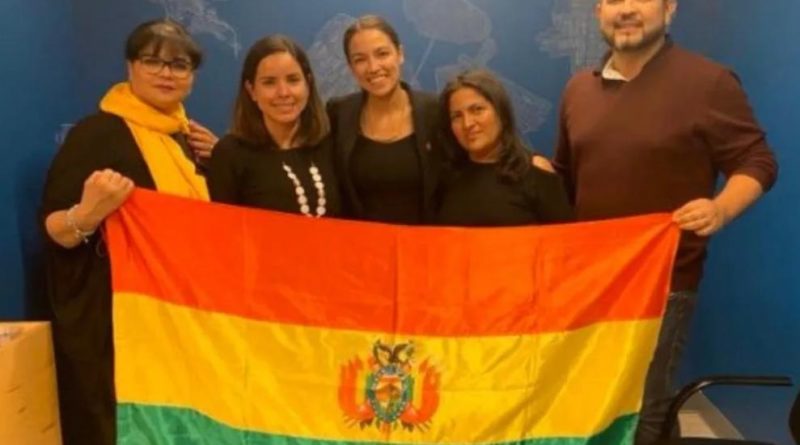 Alexandria Ocasio-Cortez, the celebrity who moonlights as my Congressional representative, has repeatedly claimed to speak for “ordinary people,” but she refuses listen to them, even if they are constituents.

In late November, shortly after the US-backed military coup that unseated the legitimate president of Bolivia, I together with my life companion requested a meeting with Rep. Ocasio-Cortez, whose local offices are located just a short walk from our Jackson Heights apartment building. Working on behalf of a group of anti-imperialists opposing the fascist junta, we hoped to persuade her of the need to act quickly to thwart the coup and defend the lives and rights of the Bolivian people.

Although we never got past the reception desk, we were permitted to present a petition signed by leading academics and anti-imperialist organizers on behalf of the people of Bolivia. We provided all personal data and contact info requested by the office. We were promised that we would be contacted promptly to discuss scheduling a meeting.

We were not contacted. For weeks. After pressing the issue, always taking care to remain courteous and respectful of process, we were subjected to a galling and contemptuous bureaucratic runaround that sometimes felt like applying to – and being rejected by – an exclusive private school.

This three-month process involved repeated visits to her office, where our reception ranged from chilly to downright intimidating, endless emails and telephone calls, bureaucratic excuses and dissimulations, and eventually, after much persistence on our part, a half-hour vetting via conference call by a Washington staffer.

The result? As we say in Queens, bubkes.

By contrast, a group of imperialist sympathizers who had been promoting the coup for months were granted instant access. On November 16, four days after the military coup that destroyed Bolivian democracy, Ocasio-Cortez met with a group of pro-Áñez, pro-Camacho activists led by one Ana Carola Traverso. Traverso’s connections to the Bolivian coup plotters have been extensively documented online.

RELATED CONTENT: “Right Now Is the Moment to Decide If You Are Pro-Peace or Not”: Ocasio-Cortez Joins Progressive Chorus Against War With Iran

It's almost as if these fascists have a war room in Brooklyn https://t.co/E6CwIkGjoI pic.twitter.com/LkVjgUQB4i

Rep. Ocasio-Cortez symbolically embraced the coup by posing for a photo with this group as they brandished the tricolor Bolivian flag, which during that period had become a signal of support for the golpistas (as opposed to the Wiphala flag, which symbolized popular resistance to the takeover). She told them that she supports their “democratic grassroots movement” and offered them “direct lines of communication.”

In sum, a gang of coup supporters, not constituents, were granted instant access, a photo op and promises of ongoing support. Actual constituents, opposing the coup, were shown the door.

Our reception by Rep. Ocasio-Cortez was radically different from that I received from her predecessor, Joe Crowley. When, in 2004, I requested a meeting on behalf of the Queens Antiwar Coalition, we were granted prompt and respectful access to the Congressman. We did not have high hopes of changing his vote on the Iraq, but we felt it was important that he hear from his constituents.

So, apparently, did he. We were greeted warmly in his rather funky local office – a striking contrast with AOC’s soulless corporate-style digs, where underlings refer to her as “the Boss” – and were encouraged to speak our piece. Crowley never pretended to be an opponent of US imperialism, but he gave us a respectful hearing, stated his position, and engaged in what felt like meaningful discussion of the war. At a minimum, as Twitter’s bluecheck pundits would say, we felt “seen.”

AOC, by contrast, has no time for people who cannot help her to burnish her brand as she prepares to run for higher office. As a local staffer (who declined to introduce himself) proudly informed us: “She refuses 99 percent of meeting requests from constituents.”

Meanwhile, she happily clears her schedule for interviews about her makeup routine, canned videos in which she postures as a fearless progressive, and closed-door meetings with regime-change sympathizers.

But she will not make time for residents of her district. So much for “ordinary people.”

Jacob Levich is a university administrator who has lived in New York’s 14th Congressional District for more than 20 years.