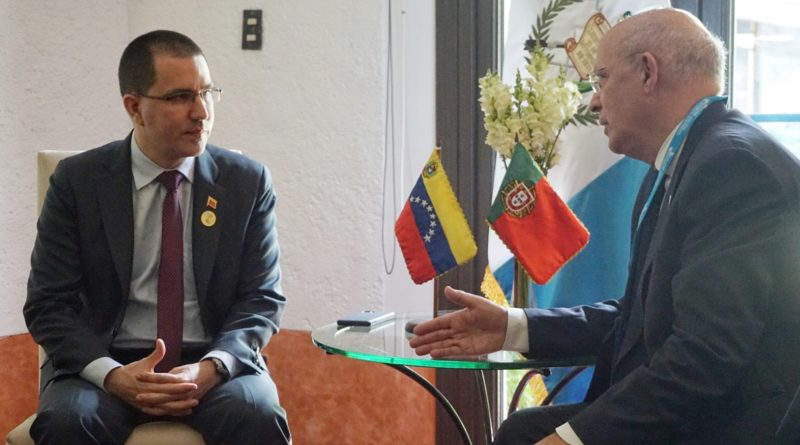 Following previous statements on this matter, the PCP expresses its concern for the consequences of the Portuguese government’s position of confrontation and interference against the Bolivarian Republic of Venezuela, the Venezuelan people and the legitimate authorities of that country.

An irresponsible stance by the Portuguese government is at the root of the recent deterioration in Portugal’s relations with Venezuela and, in particular, of the harm caused to the community of Portuguese expatriates living in that Latin American country, namely following the temporary suspension of flights by TAP [air carrier].

The PCP considers it necessary to investigate the facts and circumstances surrounding the strange transit through Lisbon of Juan Guaidó and those that accompanied him, and the use of a flight of TAP – the national air company – for his return to Venezuela, after a tour of the USA, Colombia and countries of the European Union, seeking the support which he lacks in his own country and aid for his putschist and anti-democratic activities.

Portugal must not serve as a platform for imperialist aggression and conspiracy against other peoples, as has happened on other occasions – such as the “Azores Summit” prior to the war of aggression against Iraq and, more recently, the meeting of Michael Pompeo and Benjamin Netanyahu which articulated the new escalation of aggression against the Palestinian people.

At the same time, the PCP underlines the urgent need for Portugal to, in conformity with the Constitution of the [Portuguese] Republic and the United Nations Charter, free itself from a shameful foreign policy of submission.

The deplorable incident involving the passage through Lisbon of the US imperialism’s puppet has serious precedents. Openly interfering in the internal affairs of a sovereign country, the Portuguese government has not only challenged the legality of the President of Venezuela. It took an active position of support for the “self-proclaimed president”, placing itself from the very first moment in the frontline of the Trump Administration’s operation of interference and aggression which seeks to overthrow the legitimate Bolivarian Government. Its support for the operation that was defeated on February 23, 2019; the shameful campaign of disinformation that has been carried out for an entire year by the State-owned TV channel – RTP; the government’s silence in relation to the ferocious economic and financial blockade imposed by the USA; the complacency with the theft, perpetrated by banks with capital owned by the Portuguese State, of assets owned by the Venezuelan State; – all these are eloquent examples of the responsibilities of the Portuguese government in the deterioration of the relations between both countries, with serious harm for the Venezuelan people and for the Portuguese community in Venezuela.

This is the fundamental underlying issue that cannot be avoided.

The PCP will continue acting to normalize the relations of Portugal with the Bolivarian Republic of Venezuela – in the interests of both peoples, and therefore also of the Portuguese community in that country – based on the respect for sovereignty and national independence and for the ideals of peace, cooperation and friendship. The right of the Venezuelan people, as of all peoples of the world, to decide their own fate without foreign interferences, must be respected.

Featured image: FM of the Bolivarian Republic of Venezuela, Jorge Arreaza, held a meeting with his counterpart from the Republic of Portugal, Augusto Santos Silva on November 2018. Archive photo by Venezuelan MFA.