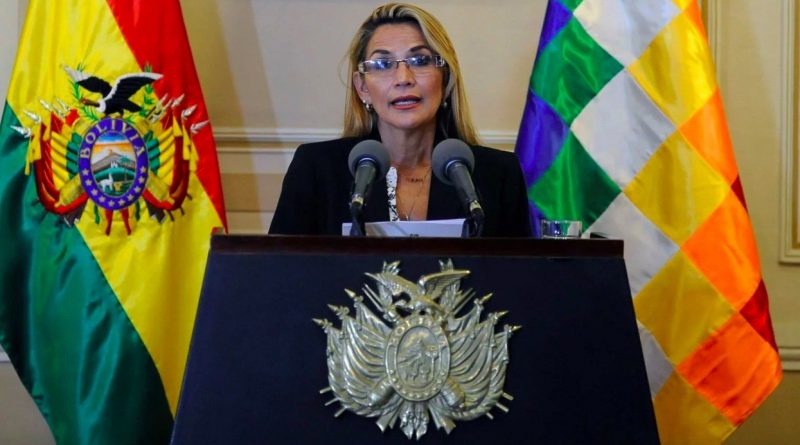 The Washington-recognized interim government which just ascended to power via US-backed military coup in Bolivia is already shifting the nation’s foreign policy into alignment with the US-centralized empire, severing important ties with two governments which have resisted absorption into the imperial blob.

“Bolivia’s caretaker government isn’t wasting any time overhauling its foreign policy, announcing Friday that it will expel hundreds of Cuban officials and break ties with longtime ally Venezuela,” The Miami Herald reports. “In a series of statements, Bolivia’s new foreign minister, Karen Longaric, told local media that about 725 Cubans — including doctors and medical staff — would begin leaving Bolivia on Friday.”

“In that same interview she also said she’d be recalling Bolivia’s diplomatic staff from Venezuela,” Miami Herald adds. “Later, asked if she would maintain ties with Venezuelan leader Nicolás Maduro, she said, ‘Of course we’ll break diplomatic relations with the Maduro government.’”

Of course they will.

In more it’s-totally-not-a-coup news, the self-proclaimed “President” of Bolivia – after seizing power as the left-wing President was sent into exile & warning him he’d be arrested if he returned – cut off relations with Venezuela & expelled Cuban doctors https://t.co/ovXx0J57ai

This news comes as no surprise to anyone who’s been paying attention. US foreign policy is essentially an endless war on disobedience, in which governments that refuse to bow to US interests are toppled by any means necessary and replaced by governments who will.

International affairs are much easier to understand once you stop thinking in terms of separate, sovereign nations and start thinking in terms of alliances and empire. What we are witnessing can best be described as a slow-motion third world war between what amounts to an unofficial globe-spanning empire centralized around the United States and its military on one side, and all the nations which have refused to be absorbed into this empire on the other. Nations which allow themselves to be absorbed are rewarded with the carrot of military and economic alliance with the empire, and nations which refuse are punished with the stick of invasions, sanctions, trade wars, and coups, with the ultimate goal being total unipolar global domination. The bigger the imperial blob grows, the stronger and more effective it becomes in undermining the interests of unabsorbed nations like Venezuela and Cuba.

Nothing takes precedence over this agenda of unipolar hegemony. As long as a nation remains loyal to the empire, it can fund terrorists, butcher Washington Post columnists, and create the worst humanitarian crisis in the world without fear of any retribution of any kind from the US-centralized empire. As a leaked State Department memo explained in 2017, so far as the empire is concerned human rights violations are nothing more than a strategic narrative control weapon with which to attack unabsorbed nations, and to be ignored when they are perpetrated by absorbed nations.

It should therefore also surprise no one that this same Washington-recognized government installed via US-backed military coup is now murdering demonstrators who object to it.

#Bolivia | Police and military forces repress protests against the coup. At least five killed by bullet impact in Sacaba, Cochabamba.

As of this writing there have been five protesters confirmed to have been killed by gunfire in Cochabamba, where security forces are cracking down on demonstrations with extreme aggression against majority-Indigenous demonstrations in support of the ousted president Evo Morales.

The narrative managers at The New York Times are reporting on the events in Cochabamba with the obnoxious insinuation that it may actually be Morales and Bolivia’s Indigenous population who are to blame for current tensions. Here are a couple of excerpts from NYT’s latest contribution to the narrative matrix titled “Ethnic Rifts in Bolivia Burst Into View With Fall of Evo Morales” (emphases mine):

Mr. Morales’s nearly 14 years in power represented a breakthrough for the three-quarters of Bolivians who are either of Indigenous descent or identify as members of Indigenous groups. But he also reinforced his base of support with explicit appeals to racial identity that many Bolivians found threatening and polarizing.

“Racism exists in Bolivia; it existed before Evo, and it will never disappear,” said Michelle Kieffer, an insurance broker, as she sipped a cappuccino in an upper-middle-class neighborhood of the country’s administrative capital, La Paz.

“While Evo started an important discussion,” she added, “he also manipulated the race issue, and that has caused disunity. And now people of different races look at each other with suspicion.”

Right. Gotcha. Maybe it’s the impoverished brown-skinned people who are in fact the real fascists, and not the literal Christian fascist coupmongers whose US-backed government takeover they are protesting. Thanks, NYT.

Morales won re-election by over ten percentage points last month, and his previously-elected term wasn’t scheduled to end until January. He was commanded to resign during a current term by the military despite fully acquiescing to demands for a new internationally supervised election. Now it’s being reported that the popular leftist party to which he belonged, MAS, may be banned by the Jeanine Añez-led interim government from participating in the next elections.

Despite all this the western mass media are continuing their cartoonishly ridiculous pattern of resisting the use of the word ‘coup’ when reporting on Bolivia, except to admonish people for using that word as in the case of recent narrative management pieces by The Washington Post, The Washington Examiner, and The Economist.

“Supporters of the coup in Bolivia can’t call it a coup,” US politician Lee Carter recently noted. “The US has a law preventing us from sending foreign aid to a new government if it was installed by a coup. So they come up with absurd claims that the military forcing Evo out somehow isn’t a coup.”

And the western mass media are falling right in line with the government forces in refusing to use this word, despite the ousting of a government by the military being exactly the thing that a coup is. This is because in a plutocracy, plutocrat-owned media is functionally the same as state media. Reporters for plutocratic media know what they are and are not permitted to say without being told, so they advance narratives which favor the status quo upon which their plutocrat employers have built their respective kingdoms. This is the status quo of the US-centralized empire, which just absorbed Bolivia and pivoted its foreign policy against the unabsorbed governments of Venezuela and Cuba.