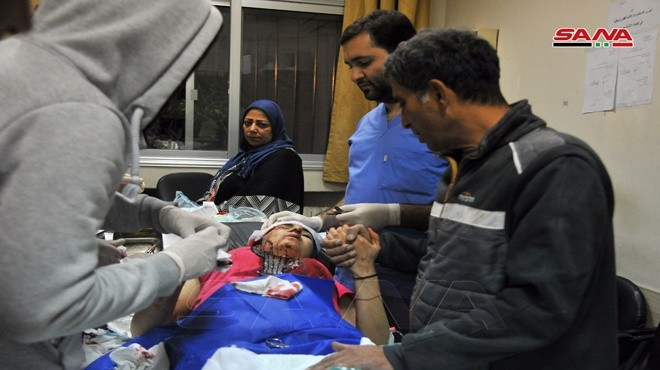 Damascus, SANA-The Air Defenses at the Syrian Arab Army, after midnight, foiled an intensive Israeli rocket assault that targeted the outskirts of Damascus, and destroyed most of the missiles before reaching their targets while two civilians were martyred and others were injured due to the aggression.

A military source told SANA that “At 01:20 am, Israeli warplanes fired several missiles from the direction of both the Occupied Golan, and Marj Eyoun in Lebanon targeting the outskirts of Damascus, and Immediately our air defenses foiled the attack, intercepted the hostile missiles, and downed most of them before they reached their targets.”

“The work is still underway to examine the situation clearly and estimate the damages and losses caused by the aggression” the source added.

SANA’s reporter said that “The shrapnel of the one of Israeli aggression missiles hit a house in the town of Saasa south-west of Damascus, claiming the lives of two martyrs, and injuring several others who were hospitalized to al-Quneitra and Damascus to receive the required medical care”.

RELATED CONTENT: Moscow Urges London to Clarify Whether Founder of ‘White Helmets’ Had Links to Al-Qaeda

A medical source at Qatana National Hospital said to SANA’s reporter that “A man and a woman were martyred while several others were injured due to the aggression on the town of Beit Saber in Saasa area south-west Damascus”. SANA’s reporter pointed out “That the shrapnel of another missile hit also a residential building in Qudsayya suburb west of Damascus injuring a girl”, “the building was badly damaged too” he added.

Throughout the years of the terrorist war waged against Syria, the Syrian air defenses have confronted repeated Israeli acts of aggression as the Israeli enemy interferes whenever its tools of terrorist organizations are defeated by the Syrian Arab Army Units.

Damages caused by the Israeli aggression on one of the buildings in Qudsayya Suburb, west of Damascus.