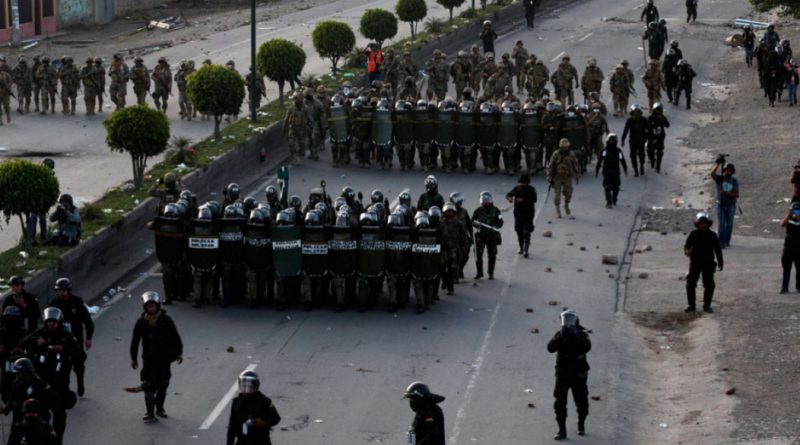 Bolivia’s coup regime seems determined to drown the opposition in blood. Protesters demonstrating for the return of elected president Evo Morales have been gunned down in La Paz and while marching on Cochabamba.

Accurate figures are hard to come by, since the Bolivian government is clamping down on free reporting. Journalists have been attacked by police; foreign reporters threatened with deportation, according to the Inter-American Commission on Human Rights (IACHR).

The IACHR and the UN High Commissioner for Human Rights might sound the alarm over lethal force by the security forces, but “president” Jeanine Anez wants more of it: signing a decree exempting troops from criminal responsibility for anything they might do during “the restoration of order and public stability.”

Given that Anez is now notorious for a tweet in which she declared La Paz “no place for Indians” and demanded that indigenous peoples go back to the mountains or the plains, it is hardly surprising she is unconcerned at shedding indigenous blood.

The coup in Bolivia has been explicitly racist, burning the indigenous Wiphala flag, involving bizarre prayer ceremonies celebrating the “return of Christ” and expulsion of Pachamama, or Mother Earth, from the presidential palace and parliament in a symbolic victory of the descendants of white Spanish Catholic colonists over native American heathens who had the effrontery to elect one of their own as president.

But there are further reasons why Anez needs to smash opposition quickly. Of all the US-inspired reactionary takeovers in Latin America in recent years, that in Bolivia is the most blatant.

Brazil’s president Dilma Rousseff was removed in a “constitutional coup” where crooked senators and parliamentarians combined to override the popular vote. But there is nothing constitutional about either Morales’s overthrow or Anez’s investiture.

As the US-based Centre for Economic & Policy Research (CEPR) confirms in a detailed study, Morales’s first-round victory in last month’s presidential elections was in no way irregular. The result was in line with most polls. A late surge for him was predictable and normal, the result of the rural and indigenous districts that have always disproportionately supported him taking longer to count.

There was no justification for the Organisation of American States claim that there were problems with the vote. Even if it had been correct, nobody — the OAS included — disputed Morales’s first-place position, only whether he had won by enough to avoid a second round.

The certain knowledge that he had both won the election and would win any re-election lay behind opposition leaders’ refusal to countenance his offer of dialogue and a second vote. Today it lies behind Anez’s insistence that he will not be allowed to run in any new election and will be arrested if he tries to return.

RELATED CONTENT: Videos of Repression in Bolivia: Six Dead in El Alto and More Than 20 Injured

The fury of Bolivians cheated of their elected government has to be subdued with terror before events in what is now a volatile continent spiral out of the Bolivian military’s control. A collaborator over the border in Argentina leaves office on December 10; his successor Alberto Fernandez has denounced the coup.

Protests against Chile’s right-wing regime are again erupting as President Sebastian Pinera backtracks on concessions. In Ecuador, Lenin Moreno’s bid to blame mammoth protests against his own neoliberal regime on Cuban medical aid projects shows how panicky the Latin American right is.

A bid by Venezuelan wannabe Juan Guaido to revive the anti-government movement there was outnumbered in Caracas by a “march against fascism” that condemned the terror in Bolivia, while the horrifying nature of the right’s revenge in the latter country is a taster of what would follow a successful Venezuelan coup.

Calls for restraint from organisations such as the UN don’t cut it. Bolivian protesters face violence because they are exposing the illegitimate character of the government. International solidarity must include immediate pressure for an end to the violence — but should extend to demanding the return of the country’s elected leader.