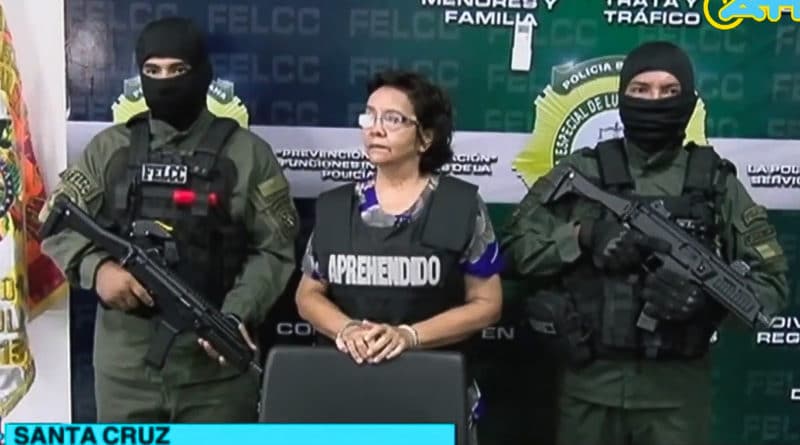 The US-backed administration of Jeanine Añez is arresting prominent members of the press and even doctors in what it calls a “dismantling of the propaganda apparatus of the dictatorial regime of Evo Morales.”

The U.S.-backed right-wing coup government of Jeanine Añez continues its moves against media and other dissenting voices. The latest victim of the crackdown was Marcelo Hurtado, president of the ATB media network. Hurtado was paraded before cameras; handcuffed and forced to wear a vest labeled “arrested.” He was flanked by two black clad, masked and armed members of the country’s infamous police, who led a successful coup against socialist president Evo Morales in November.

ATB (private outlet) was one of the only Bolivian TV channels that provided balanced coverage before the coup.

This is Marcelo Hurtado, their director. pic.twitter.com/uXPlzXusCk

The Añez administration justified Hurtado’s public arrest on the grounds that he was linked to Morales and ex-Vice President Alvaro Garcia Linera, in what new Communications Minister Roxana Lizarraga has called the “dismantling of the propaganda apparatus of the dictatorial regime of Evo Morales.” Since November, the new government has begun systematically destroying all voices opposed to it. TeleSUR, Bolivia TV and RT en Español have already been taken off the air, journalists have been shot, detained and tortured. Meanwhile, Al-Jazeera correspondent Teresa Bo was tear-gassed in the face live on air at point-blank range by riot police as she stood alone, talking to the camera.

Al Jazeera's @TeresaBo has been intentionally tear-gassed in the eyes by Bolivian police while on air. She was simply trying to report what was happening. And, being a total pro, she kept right on doing it. pic.twitter.com/74foN7tvRF

The repression of journalists has brought back memories of previous eras when most of Latin America was ruled by fascist dictatorships. But unlike in Argentina or Chile, where the governments “disappeared” dissenting voices, refusing to confirm or deny their involvement, the Bolivian government is doing so openly; in fact, making pains to publicize their treatment of their opponents.

Another group the Añez administration is targeting is doctors. On Monday the same armed, masked police conducted a press conference displaying Mirtha Sanjinez, a hospital administrator who had disobeyed orders not to treat injured opponents of the government. “I am innocent. Gentlemen of the Civic Committee: stop persecuting innocent people, I am an honorable person, I have worked honorably,” said the elderly lady to the cameras of pro-Añez media attending, as she was taken away to an uncertain fate.

The arrests continue in #Bolivia. The Montero Hospital administrator who had staff provide medical care to the wounded Argentine citizen, accused of being a FARC member. So much for the Hippocratic Oath, due process, justice, truth. It's getting worse.https://t.co/8ZiMeQkceB pic.twitter.com/KRcDUTidH3

Cuban doctors provided the backbone of Bolivia’s universal healthcare service. However, upon gaining power, Añez immediately expelled the entire cadre, over 700 in total, closing down health facilities aimed at the country’s poor. In more than a decade of partnership with the previous socialist government, Cuban doctors had carried out over 72 million consultations across Bolivia. This week MintPress News’ Ollie Vargas visited a hospital in the city of Cochabamba where 143 Cuban staff provided free healthcare to those who needed it, finding it closed and abandoned. He also reported that Bolivian doctors who had previously collaborated with Cuban colleagues had been arrested.

Cuban doctors in Bolivia provided free healthcare until they were pushed out by the US-backed coup. The hospitals they worked at are still closed, leaving working class communities vulnerable. Report from @OVargas52 pic.twitter.com/s3m0K8E3v7

In November, after military generals and police appeared on television demanding his resignation, President Morales fled to Mexico. In his place, the military picked Añez, a lesser-known senator. Añez’s right-wing Democrat Social Movement Party won just four percent of the vote in the October elections that sparked the unrest and, eventually, the coup. In contrast, Morales’ Movement to Socialism (MAS) party received 47 percent. Añez immediately exonerated the military of all previous and future crimes, giving them a carte blanche to kill anyone opposing the new military-approved government. Medea Benjamin was on the scene of the Senkata massacre for MintPress News, where she noted the morgues were overwhelmed so local church pews were filled with blood-soaked corpses.

Despite labeling itself an “interim government,” in classic “shock doctrine” style the new administration has also planned a mass privatization program and reoriented Bolivia’s foreign policy, pulling out of several regional organizations. New elections are scheduled for May. However, with Morales and others in the MAS banned and labeled “terrorists” by the current administration, it is difficult to see how they will be free and fair. Añez has already declared that Bolivia must prevent the “savages” (i.e. the indigenous majority) returning to power.

In dictatorship, laws are meaningless.

Bolivia's coup govt has hurriedly put together some fake charges against Romero, Evo's former minister, following less than a day of pressure by far-right activists camped outside his house. https://t.co/He3YcOOqKD pic.twitter.com/AjnVrkZ8EO

An eight-person team from the United States government agency USAID arrived in Bolivia Thursday purporting to be experts in electoral systems aiming to strengthen and support the May elections. The U.S. government immediately welcomed the November coup and has supported a number of previous attempts at dislodging Morales from power. The MAS has set a date of next weekend to choose their candidate. While the left is united around MAS and against the coup, the right has fractured into four roughly equal factions, opening up the possibility of a serious vote-splitting problem for the current administration. But regardless, without a free and independent press, the May elections will surely lack legitimacy.