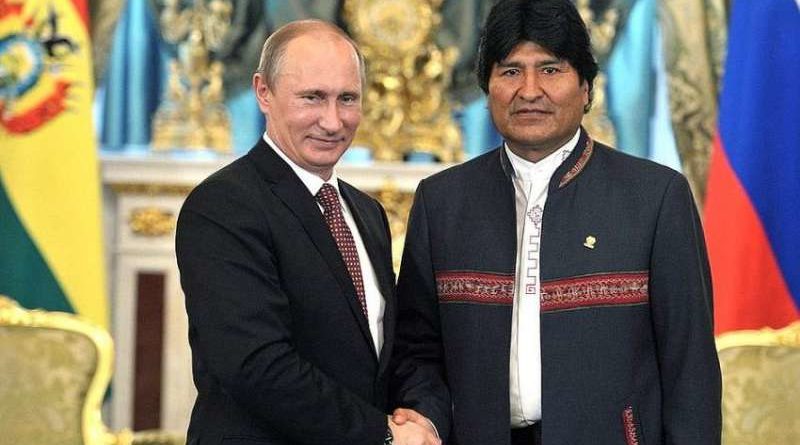 The fake news allegations that Russia “meddled” in Bolivia’s recent election in order to help (“former”) President Morales win and the more recent claims late last month that its soldiers are supposedly “waiting for his return” in order to presumably help restore him to power are nothing more than provocations designed to manufacture the “plausible pretext” for the coup “authorities” to renege on their country’s previously agreed-upon deals with Moscow unless the latter possibly concedes to renegotiating “better” (lopsided) terms, but even then, some of the most strategic projects might still be canceled under heavy US pressure.

Russia’s always being blamed for everything that goes wrong across the world, and the Hybrid War on Bolivia is no different. Even before this asymmetrical warfare campaign succeeded in carrying out regime change against democratically elected and legitimate (now-“former”) President Morales, there were accusations that Moscow “meddled” in its recent election in order to help him win, which with the knowledge of hindsight in recognizing that the coup against him was planned well in advance, it seems obvious that such claims were being made in order to discredit his victory and therefore “legitimize” the Color Revolution against him. Having served its purpose, a new infowar narrative about Russia is conveniently being cooked up, and it’s that its soldiers are supposedly waiting for Morales’ return in order to presumably help restore him to power, an audacious allegation that President Morales felt compelled to debunk on Twitter late last month. This hysteria also contributed to preconditioning the “international community” to accept the removal of RT’s Spanish broadcasts from the air on the contextually implied basis that the outlet was “meddling” in its “domestic affairs”.

RELATED CONTENT: The OAS has to Answer for its Role in the Bolivian Coup

Framing Russia as the bogeyman in Bolivia accomplishes more than just inciting anti-Morales riots and distracting global attention from the US’ support for the coup since it can also be exploited as the “plausible pretext” to “justify” the coup “authorities'” possible decision to renege on their country’s previously agreed-upon deals with Moscow, especially seeing as how this latest American-backed regime change threatens some of its geostrategic interests in South America. Most of the media never paid much attention to it, but Russia and Bolivia signed agreements in the nuclear energy, hydrocarbon, lithium, and military spheres over the years, with the last-mentioned being particularly important because President Morales said over the summer that he was interested in replacing the American military equipment that he inherited from his predecessors over a decade ago with modern Russian wares. Altogether, these agreements pose a challenge to the US’ historical hegemony.

It’s therefore unsurprising that the US-installed coup “authorities” might be considering “publicly plausible” options to renege on their previously agreed-upon deals with Russia without attracting too much flak for doing so and making it entirely obvious that this is being done at Washington’s behest, hence the reason for propagating fake news narratives about Russia’s allegedly secret political and military interventions in the country in parallel with expressing likely insincere interest in expanding energy projects with Moscow. The scenario is progressively unfolding whereby the coup “authorities” might declare those deals null and void on the basis that Moscow is supposedly behaving “aggressively” towards them and in alleged “violation” of international law unless it concedes to renegotiating “better” (lopsided) terms, but even then, the future of its projects isn’t guaranteed since some of the most strategic ones might still get canceled under heavy US pressure. There’s no evidence whatsoever that Russia is guilty of the meddling that’s being implied as the “legal” basis for advancing this scenario, which makes these scandalous claims a remix of the same ones that were made earlier in the year about alleged Russian activities in Venezuela.

Back then, it was falsely alleged by both the Mainstream and Alternative Media that Russia was setting up a base in the Caribbean country, the rumors of which were driven by the temporary presence of Russian servicemen who were there to train their Venezuelan counterparts per a preplanned mission to accompany the delivery of new military equipment. There were also claims that Russians were physically involved in responding to the Color Revolution riots at the time, none of which ever happened. This time, however, there aren’t even any Russian servicemen in Bolivia on training missions to lend even a little “credibility” to the claims of a secret military intervention there, though the very fact that such a scenario is being suggested proves that those who are propagating it believe that their intended audience will unquestionably believe them because they regard the narrative preconditioning over the past year to have been successful in facilitating this.

Nevertheless, it really doesn’t matter whether the average Bolivian or whoever else is being targeted by this fake news narrative of supposedly secret Russian political and military interventions in the heart of South America believes it or not since the coup “authorities'” US patrons mostly only want to craft the headlines that could used in the event that their proxies go through with the expectation that they’ll eventually renege on their country’s previously agreed-upon deals with Russia. Anything being said about alleged Russian activities in Bolivia at this point should therefore be taken for granted as agenda-driven fake news. The only foreign force that’s meddling in Bolivia is the US, which wants to see Croatian-style ethnic cleansing and South African-like apartheid there, ergo why it’s ordered its surrogates to scream so loudly about Russia in order to distract global scrutiny from this unsavory fact.