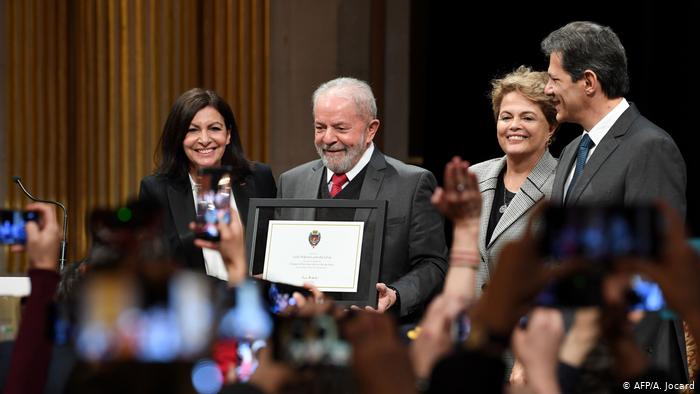 The former Brazilian president Luiz Inacio Lula da Silva receives here the status of Citizen of Honor of Paris for his commitment to the fight against economic and social inequalities.

In a ceremony at the City Hall of Paris, a building with more than six centuries of history and headquarters of the City Hall since 1977, the capital city councilor, the socialist Anne Hidalgo, will deliver this afternoon the recognition to the founder of the Workers Party (PT), who served 580 days as political prisoner, in a judicial maneuver to neutralize the possibility of his return to power.

Lula will be accompanied at the event by prominent PT figures such as the former head of state Dilma Rousseff and former presidential candidate Fernando Haddad, defeated at the polls in October 2018 by the far-right representative Jair Bolsonaro.

The title of Honor Citizen of Paris is granted exceptionally for the defense of human rights, in an attempt to protect its promoters, and the list of winners includes Mumia Abu-Jamal, the first to receive it in 2001, Nelson Mandela (2013) and biodiversity (2016).

Paris City Hall decided last October to award the 74-year-old politician for his leadership from the Planalto Palace (2003-2010) in combating inequality, which allowed some 30 million Brazilians to get out of extreme poverty and access rights and essential services.

She also highlighted his battle against racial discrimination and his complaint for being a victim of a conspiracy to prevent him from contesting the presidency in the 2018 elections, which opened the doors of power to Bolsonaro.

Released on November 8, Lula thanked the recognition in a phone call from Hidalgo, who called him “the most Parisian of all Brazilians.”

In the conversation the social fighter promised to visit this capital, where he arrived as part of a European tour that will also take him to Switzerland and Germany.

Before Lula, Brazilian indigenous leader Raoni Metuktire was awarded the honorary citizenship of Paris in 2011.

Featured image: Lula, accompanied by Dilma and Haddad, receives the title of citizen of Paris from Mayor Anne Hidalgo