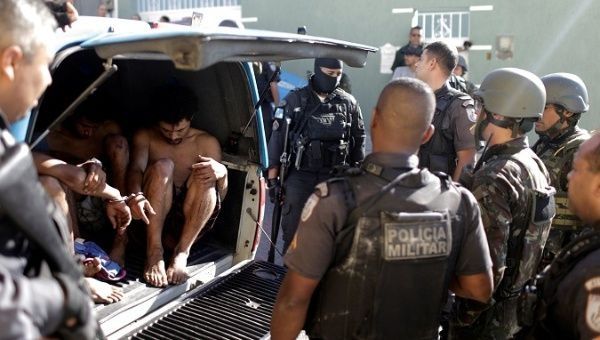 Brazil’s military police killed 434 in 2019, making it the most violent period in recorded history. Most of the killings occurred against Black men in favelas in Rio de Janeiro.

This became the most violent 90 days period in recorded history. The data did not include killings by the Rio de Janeiro Civil Police. The killing spree by the military police comes less than six months into the presidency of far-right President Jair Bolsonaro.

Last year, during the same period, 386 deaths were reported.

More than 100 incomplete rifles were seized at the home of Ronnie Lessa who was arrested for the murder of councilwoman Marielle Franco on March 2018. His guns were not counted in the data.

Governor Wilson Witzel, a right-wing ally of President Bolosonaro, is a supporter of the right of police to kill with impunity. He had ordered the police to use snipers and murder anyone who they think is carrying a weapon.

Due to this order, 90 percent of the victims of police killings are young Black males from favelas.

Bolsonaro’s Justice Minister Sergio Moro has announced an anti-crime bill, which if passed, would let the police shoot anyone who makes them “feel afraid.”

Bolsonaro has publically been pro-weapon and police brutality. He signed a decree early May, relaxing rules of carrying weapons for collectors, hunters, and sports shooters, known by the acronym CAC.

The CACs can carry loaded weapons on the streets which were not allowed previously.

The President of Brazilian Forum for Public Security, Renato Sergio de Lima said the presidential decree would be a step towards the legalization of the possession of weapons in the country.