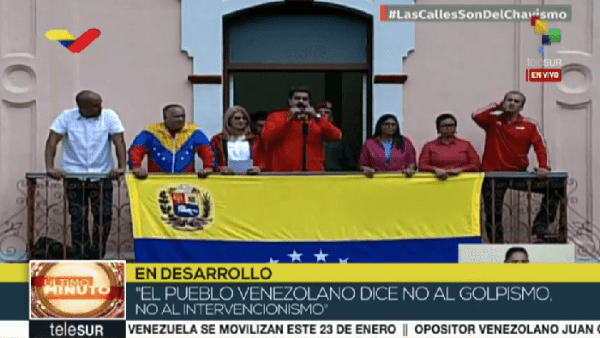 In a televised address to the nation from the Miraflores Palace in front of a crowd of supporters that today marched to support him, President Nicolas Maduro announced the complete break of diplomatic relations with the US.

“I just signed the diplomatic note giving the US Embassy in Caracas and all its personal, 72 hours to leave Venezuela,” said President Maduro.

In recent weeks the campaign promoting a Coup D’Etat in Venezuela has reach unprecedented levels, with all kind of US spokespersons meddling directly or indirectly in Venezuela internal affaires. And today a few seconds after the President of Juan Guaido in content proclaim himself as President of Venezuela in an evident Coup D’Etat move, the Whiter House ran to recognize him.

A few hours later the US Department of State post on its twitter account an unprecedented communique defying President Maduros decision and stating that the US only recognizes as “Venezuelan Authority” Juan Guaido and wont vacate their Embassy in Caracas. To this Diosdao Cabello in his tv show being currently broadcast in VTV say that the Venezuelan Government expect the US diplomat resume common sense and understand that they will need public services to operate.