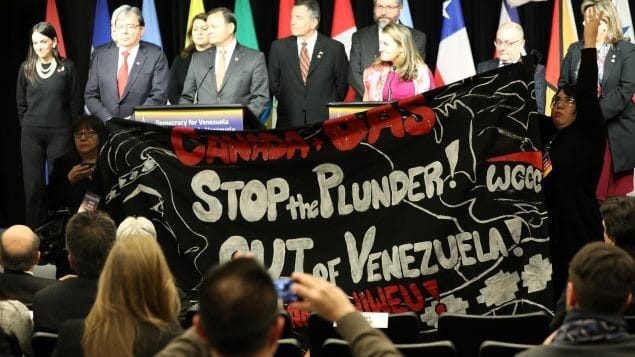 Two activists interrupted this Monday, February 4, the press conference of the Foreign Minister of Canada, Chrystia Freeland, at the time it announced the new interventionist measures that agreed the so-called Lima Group against Venezuela.

In videos that circulate on social networks you can see the moment in which two women began to chant “hands off Venezuela” in the middle of the activity. The women also carried a banner with messages against that regional block.

Likewise, it is detailed how the security officers of the premises proceeded to evict them. One of the activists, even, started throwing papers that looked like bills (dollars) or flyers.

After the interruption the Canadian foreign minister said that they have allowed to protest in Canada but that’s not allowed in Venezuela. This official seems not to have seen this photo of Juan Guaido taken a few days ago. Or the images of the opposition demonstrations in Venezuela of the last days.

It is also alarming that the Canadian foreign minister raise the democracy and freedom flag when the day before credentials were denied to journalist of Sputnik, Telesur and RT to cover that same event.