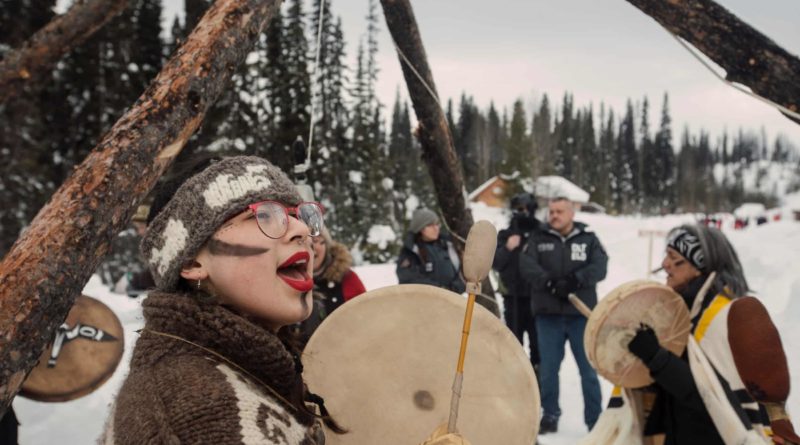 As armed Canadian police officers advanced through snow towards their camp, the group of Indigenous women was absorbed in a drumming ceremony to honour the spirits of missing and murdered Indigenous women across the country.

Rows of red dresses hung from a fishing line slung across the road, and from pine and spruce trees in the surrounding forest – each one a memorial to the thousands of Indigenous women killed or disappeared in recent years. A pair of helicopters buzzed overhead, but on the ground, the women’s voices and drums drowned out the officers as they warned them to leave or face arrest.

“We remained in ceremony – even as the tactical officers surrounded us and began pick off individuals,” said one of the women, Dr Karla Tait.

Set amid dense evergreen forests near the bank of the Wedzin Kwah, or Morice River, the remote cabins at Unist’ot’en camp have become a place of healing for Indigenous youth, who take lessons on trapping and traditional medicines.

But the camp in north-western British Columbia is also the last line of defense in the Wet’suwet’en nation’s fight against a controversial natural gas pipeline.

The long-simmering conflict came to a head this week, as Canada’s national police force deployed helicopters, armed officers and dogs to enforce a court injunction and clear Indigenous activists who had been blocking work crews from the route of the C$6.6bn (US$5bn) Coastal GasLink project.

“I felt overwhelmed with sadness, and pain over the fact that we were being removed from our territory,” said Tait, remembering the moment she was escorted past the fluttering red dresses towards a police vehicle. She made sure to touch each dress as she left.

But she and the other “land defenders” remain defiant. Wet’suwet’en hereditary chiefs, who oversee 22,000 sq km of territory, have stubbornly opposed the project and remain locked in a battle with the courts, the pipeline company – and the government of Justin Trudeau.

And in recent days, their fight has been taken up by other groups across the country.

For more than a week, members of the Tyendinaga Mohawk have blocked freight and commuter rail traffic in Ontario, in support of the Wet’suwet’en. Elsewhere, protestors have blocked roads, barricaded access to shipping ports and occupied the offices of elected officials in a wave of dissent.

Late on Thursday, Canadian National Railway, the country’s largest freight operator, said it was shutting down its operations in the east of the country due to the continuing blockade, and warned of temporary layoffs. Soon after, Via Rail, which operates much of Canada’s passenger rail service, said its entire service would be suspended until further notice.

Climate action groups have also taken up the cause of the Wet’suwet’en, seeing their fight as part of a broader one against resource extraction projects in the country.

The demonstrations have piled pressure on Canada’s prime minister, who has vaunted his commitment to diversity and tackling the deep-rooted inequities facing Indigenous peoples.

“Trudeau has gone to the United Nations to shed tears about the history of Canada’s relationship with indigenous people,” said Tait. “And on the other hand, he’s essentially authorizing the use of force against our unarmed people for upholding our rights.”

This week, Trudeau has expressed his support for peaceful protest – but also criticised the rail blockades.

Amid pleas from business leaders for a swift end to the crisis, other politicians have been even more outspoken in their condemnation.

In Alberta – a province whose economy relies on oil and gas – the conservative premier, Jason Kenney, has warned that the current unrest is a “dress rehearsal” for future opposition to fossil-fuel based projects.

“This is not about Indigenous people. It’s not about carbon emissions. It’s about a hard-left ideology that is, frankly, opposed to the entir

e modern industrial economy,” said Kenney. “It’s about time that our police services demonstrated that this is a country that respects the rule of law.”

And after protesters barricaded the entrance to British Columbia’s legislative assembly, the province’s premier, John Horgan, called the demonstrations a “shift from traditional protest – to something quite different”.

Molly Wickham, a spokesperson for the Wet’suwet’en who also has the hereditary name Sleydo’, agreed. “Indigenous people see what’s happening to us and see what’s happening to our territory and our pristine waters – and to our people on the ground, having semiautomatic weapons aimed at us,” she said. “People are responding to that in appropriate ways.”

More than just a row over a pipeline, the Wet’suwet’en protests also reflect Canada’s often fraught relationship with First Nations.

“Ever since colonization, the aim has been to dispossess our people from our lands. To impoverish us. To assimilate us. To eliminate us,” said Tait. “We know that our self-determination, our sovereignty, our very identity, is based on us having control over our lands.”

In November, British Columbia became the first province in Canada to pass legislation promising to uphold the United Nations declaration on the rights of Indigenous peoples. But such promises seem empty in the wake of recent police actions, said Wickham.

Controversy around the Coastal GasLink project has been compounded by questions over who has the right to speak for the Wet’suwet’en.

Coastal GasLink has signed benefit agreements with the 20 elected First Nations councils along the route, including five of the six elected band councils in the Wet’suwet’en nation. But Wet’suwet’en chiefs say the authority of these groups only applies to reservations – not traditional territory where the pipeline is proposed.

Unlike in much of Canada – where relationships between First Nations and the state are governed by treaties – few aboriginal nations in British Columbia ever signed deals with colonial authorities, meaning the federal government still operates in a vacuum of authority on their lands.

In 1997, the Wet’suwet’en and Gitxsan nations won a landmark case in which the supreme court ruled that their aboriginal title had not been extinguished when Canada became a country. But the case did not establish the boundaries of that title and the court suggested subsequent cases would be needed to settle the issue.

“Aboriginal title claims of the Wet’suwet’en people have yet to be resolved either by negotiation or litigation,” wrote the justice Marguerite Church in her decision to grant Coastal GasLink the injunction. “While Wet’suwet’en customary laws clearly exist on their own independent footing, they are not recognized as being an effectual part of Canadian law.”

Legal experts believe the Wet’suwet’en would probably have a strong case to establish title to the land in the courts, enabling them to better fight the project. But such cases can take decades to adjudicate and cost millions of dollars, a prospect Tait called “insufficient” given the pipeline’s imminent construction.

For those on the front lines of the fight, the nationwide support is a vindication that the long-simmering frustrations over land claims and a fraught Indigenous relationship with the state are facing a long-overdue reckoning.

“This is far from over,” said Wickham. “We’ve had day after day of invasion and we’re still here. We’re still not giving up.”