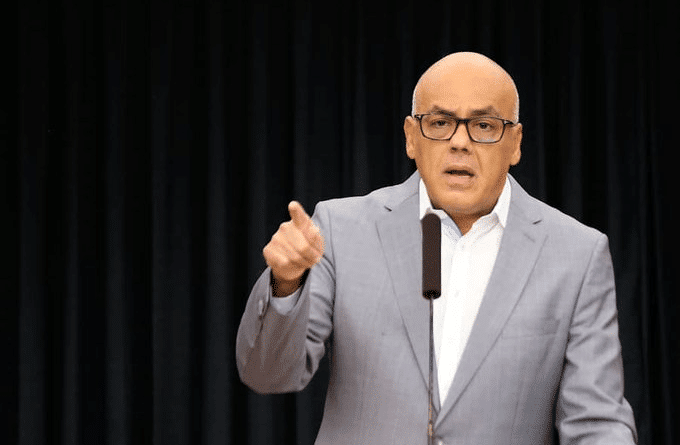 Venezuelan Vice president of Communication, Tourism and Culture, Jorge Rodríguez, unveiled this Saturday a new plot of corruption that links the leader of the extreme right, Juan Guaidó, with the cousin of Leopoldo López, Alejandro Betancourt López (financier of Popular Will), who has open cases for the money laundering of 1.2 billion dollars in the United States and 4 billion dollars in Spain.

During a press conference, Rodríguez said that Juan Guaidó had repeatedly denied the aforementioned links publicly, however, the head of the Communication and Information office showed a set of photographs showing Wilmer Guaidó (his father) meeting with businessman Betancourt López in his residence: the castle of Alamín, located in the municipality of Santa Cruz del Retamar, north of the province of Toledo (Castilla-La Mancha), Spain.

According to information published by the news corporation CNN, the US authorities confiscated the cell phone of Lev Parnas, a businessman from Florida born in Ukraine, where you can see a video in which Rudy Giuliani (personal lawyer of Donald Trump), enjoys a bullfight.

There are also photos in which he appears posing with two bullfighters, a flamenco dancer who turns her skirt and an image of the father of the Venezuelan opposition leader Juan Guaidó, next to a tray of snacks in the extravagant residence of Betancourt López. It is important to point out that this last billionaire was promoting the total privatization of PDVSA [and] was a regular visitor of his cousin, Leopoldo López, when he was being held in the Ramo Verde prison, for directing crimes of arson and property damage that were executed as part of a 2014 overthrow plan called “La Salida” against the constitutional president of the Bolivarian Republic of Venezuela, Nicolás Maduro Moros.

“Juan Guaidó is starring in the most gigantic corruption case of Venezuela of all time,” Rodríguez said.

US BLOCKADE HAS GENERATED LOSSES TO VENEZUELA OF 116 BILLION DOLLARS
The economic and financial blockade of the Trump Administration has generated a loss of 116 billion dollars for Venezuela, as a result of the theft of its assets abroad such as Citgo, a subsidiary of PDVSA, deposits in foreign banks and Venezuelan state companies in other countries.

“With everything that has been stolen and continues to be stolen, by way of example, with 116 billion dollars the Bolivarian Government could acquire CLAP boxes for all families in Venezuela, once a month, for 152 years,” Rodriguez said.

The executive order issued by Barack Obama, where the spokesmen of imperialism points out that Venezuela was an unusual and extraordinary threat against the interests of the United States,” laid the groundwork that foreshadowed the brutal situation of aggression against our country by the Trump Administration.

“Of those 116 billion dollars, Trump throws crumbs at his lackey, Juan Guaidó and his inner circle (…) and there is no control whatsoever. Citgo’s assets and Citgo deposits were stolen. Who monitors that? No one!” Rodríguez said.