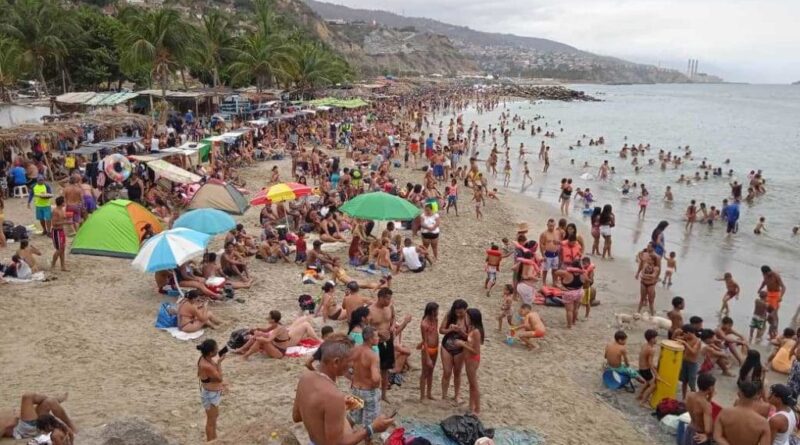 Venezuelan beaches such as Candilejas, Coral, Camurí Chico, Los Angeles, and the town of Caruao in the state of La Guaira, were packed with bathers from Caracas and Miranda state, as well as locals, for the first Carnival beach swim after the COVID-19 pandemic reopening.

The influx of bathers to the beaches of La Guaira began at 7 a.m. despite bad weather in the morning hours of Sunday, February 27, 2022. “We arrived early, the beach is clean and organized, we are with the family,” said Gregori Rodríguez, who went to Macuto’s Camurí Chico beach on the special Los Teques-La Guaira bus route, activated for these Carnivals with affordable fares by Sitssa, the state-owned bus service.

The busiest beaches in the eastern part of La Guaira, on this second day off, were Playa Surfista, La Zorra, Candilejas, and Balneario de Catia La Mar, where points of contact and road safety had been set up.

Some vacationers asked the local authorities to inspect the beach route to and from Caracas, due to the excessive price for bus tickets, which ranged from five dollars and up.

RELATED CONTENT: Inflation in Venezuela Continues to Cool Down (+Tax on Transactions in US Dollars)

Security and protection
“Around 20 road control points were installed this Sunday on the avenues of La Guaira, where they will apply breathalyzer tests, [and] counterflow channels for return,” said José Alejandro Terán, governor of La Guaira. “As well, 80 lifeguards were deployed on the beaches, to guarantee the safety and protection of vacationers and locals.”

He announced that to date, 30 transport units have been fined for overpriced tickets on the beach routes, and three minor traffic accidents were reported. No lives were lost in any of the incidents. Two of them occurred on the Caracas-La Guaira highway, and the other on José María España Avenue, due to mechanical failures.

Beach recycling
On Playa Candilejas, the Minister of Ecosocialism’s Dale la Cola a la Basura (“Give Garbage the Tail”) plan began, with booths for the collection and organization of garbage found on beaches, and a messaging campaign to raise awareness about littering and recycling.

“We went down to the beach with food, desserts, and even with water, so they told us that we should place waste and garbage in giant containers,” said Maigualida Cardona, a bather from Caracas. “It is something different and it serves to educate.”

Painful sanctions and COVID-19
After more than two years of voluntary restrictions due to the pandemic, including social distancing and bio-safety measures, added to the damages caused by the criminal blockade imposed by Washington, the European Union and Canada, Venezuelans are enjoying the traditional Carnival holiday. The celebrations are buoyed by an economic recovery brought about by a reasoned economic approach implemented by the Venezuelan government and the Central Bank of Venezuela (BCV).

Featured image: Beaches such as Candilejas, Coral, Camurí Chico, Los Ángeles and the towns of Caruao were full of vacationers. Photo: Cirilo Hernandez