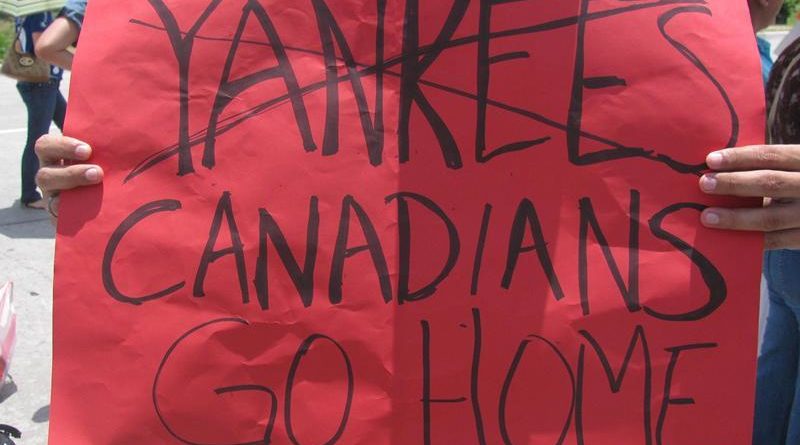 Canada is expecting Caribbean countries’ support in its bid for a seat on the UN Security Council next month. As a Canadian, it shames me to tell you my country does not deserve your support.

While the Canadian government often uses progressive, internationalist rhetoric, its current actions and failure to apologize for its imperialist, colonialist, racist past belie the claims.

At the CARICOM summit in February, Haiti, a participant in the Lima Group, pushed other members to join the campaign against the Venezuelan government. But, Jovenel Moïse is only of Haiti because of support from the US and Canada, which have greatly shaped Haitian affairs since they overthrew president Jean-Bertrand Aristide and thousands of other elected officials in 2004. Ottawa played an important role in the coup and supported the murderous foreign-imposed regime of Gérard Latortue for two years afterward. CARICOM opposed the coup against Aristide.

Ottawa has long demonstrated imperialist tendencies elsewhere in the region. In the 1970s and 80s the Canadian military trained in Jamaica on a number of occasions in preparation for an intervention to protect Montréal-based Alcan’s bauxite facilities in the event of civil unrest and/or in case a socialist government took office. According to Royal Military College of Canada professor Sean Maloney’s summary of the internal documents, “the objective of the operation revolved around securing and protecting the Alcan facilities from mob unrest and outright seizure or sabotage.” In 1988 Canadian military planning resumed with an exercise titled “Southern Renewal”. Maloney explains, “in this case a company from two RCR [Royal Canadian Reserves] was covertly inserted to ‘rescue’ Canadian industrial personnel with knowledge of bauxite deposits seized by Jamaican rebels and held hostage.”

Canada’s colonial attitude is actually of even longer standing. “Canadians of varying backgrounds campaigned vigorously for Canada-West Indies union”, writes Paula Hastings in a 300-page thesis titled “Dreams of a Tropical Canada: Race, Nation, and Canadian Aspirations in the Caribbean Basin, 1883-1919.” Canada’s sizable financial sector in the region played an important part in the efforts for Caribbean colonies. In Towers of Gold, Feet of Clay: The Canadian Banks, Walter Stewart notes, “the business was so profitable that in 1919 Canada seriously considered taking the Commonwealth Caribbean off mother England’s hands.”

At the end of World War I Ottawa asked the Imperial War Cabinet if it could take possession of the British West Indies as compensation for Canada’s defence of the empire. London balked. Ottawa was unsuccessful in securing the British Caribbean partly because the request did not find unanimous domestic support. Prime Minister Robert Borden was of two minds on the issue. From London he dispatched a cable noting, “the responsibilities of governing subject races would probably exercise a broadening influence upon our people as the dominion thus constituted would closely resemble in its problems and its duties the empire as a whole.” But, on the other hand, Borden feared that the Caribbean’s black population might want to vote. He remarked upon “the difficulty of dealing with the coloured population, who would probably be more restless under Canadian law than under British control and would desire and perhaps insist upon representation in parliament.”

Until the second half of the 20 century Canada maintained a racist immigration policy that excluded most West Indians. In recent years some Canadian politicians have floated the idea of annexing Turks and Caicos. Others have pushed for foreign tutelage of Haiti.

Canada has never apologized for its racist past towards the people of the Caribbean and to this day continues to interfere in the internal affairs of the region’s nations.

Until Canada actually walks the anti-imperialist walk, rather than spouting occasional progressive talk, Caribbean countries should vote against Canada’s bid for a two-year seat on the UN Security Council.