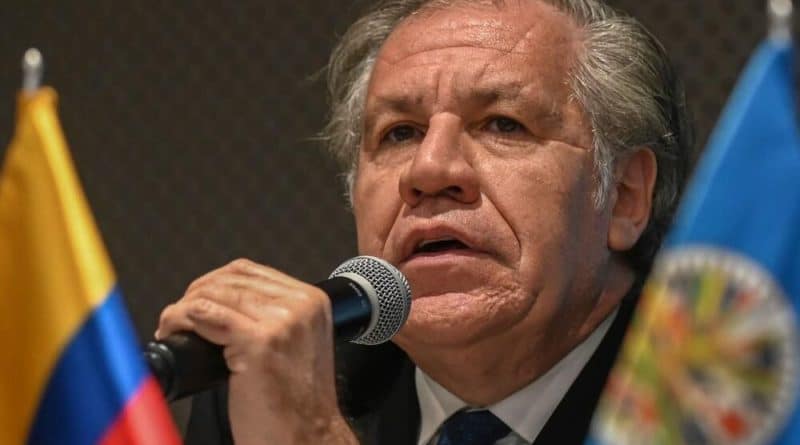 The Organization of American States is a conduit for North American imperialism in South America, says a spokesperson from Apoyamos Chile.

Apoyamos Chile (AC) is a human rights organization which “does not support Almagro’s ideology and the OAS” according to a representative of the organization.

They “visualizes the Chilean fight for a just and dignified life,” according to their Instagram page.

In his first term as Secretary General of the Organization of American States (OAS), Luis Almagro developed a reputation for being a mute and blind ally of United States foreign policy.

Canadian Foreign Affairs Minister François-Philippe Champagne said in a press statement, “Canada looks forward to working with the Secretary General and Assistant Secretary General on issues of importance to our region, including furthering democracy, gender equality and a progressive human rights agenda in the Americas.”

But Canada itself continues to violate the human rights of many groups within the nation, particularly First Nations, Métis and Inuit (FNMI) groups’ rights.

Almagro has been an open critic of Canada’s handling of incidences of Missing and Murdered Indigenous Women (MMIW). Despite Minister Carolyn Bennett’s reassurance of a policy due to come into effect next month, he has maintained his stance on Canada’s inaction.

However, he has failed to critique Canada’s key role in founding the Lima Group in 2017, and backing the group consistently. The Lima Group was responsible for a failed coup attempt against Venezuelan President Nicolás Maduro.,

In early January 2019, Minister of Foreign Affairs Chrystia Freeland secretly met with Juan Guaido. On January 23, Canada moved to acknowledge Guaido as President of Venezuela along with aggressive pressure to remove Maduro from power.

This work was aligned with United States policy in Latin America and strictly critical of the socialist movement in Venezuela, which later carried on to Bolivia. Along with political packing from Almagro, the American imperialist policy was successful when President Evo Morales of Bolivia resigned under threats to his life and vicious attacks on his political allies.

The Lima Group still agitates for Maduro’s removal to this day. Meanwhile, the OAS has yet to condemn the attempted invasion of Venezuela by armed pro-Guaido forces and the Silvercorp militia group, which failed miserably.

According to the representative of Apoyamos Chile, Almagro’s reelection is “a continuation of an American political strategy that seeks to exert heavy influence over Latin America.”

In the past, Almagro has shown support for US military invasion into Venezuela to control protests. He was also allegedly involved in the coup against the government of Evo Morales, indigenous Venezuelan former president.

“We do not feel represented [by the OAS],” – said Apoyamos Chile’s spokesperson.

OAS’ Sec-Gen’s reputation of being ignorant towards American States and the plight resulting from US military intervention has resulted in an organizational absence of peacekeeping on behalf of the OAS.

“Since October 2019, the Chilean government has repeatedly violated human rights,” said a spokesperson for Apoyamos Chile. The OAS, under the influence of American foreign policy and Almagro’s leadership has remained “indifferent” towards this.

Almagro’s stance can be compared to Canada’s political affiliations with the United States, wherein similarities exist mostly for reasons of economic benefits. An example is the sanctions laid against Venezuelan political leaders and other individuals.

For Almagro, however, the benefits of being a conduit for US foreign policy include political clout and the power to oppress dissent, a factor central to democratic societies.

“We are concerned for the future of Latin America. Military intervention and American influence continue to play a role in silencing political voices in the continent,” Apoyamos Chile’s spokesperson said.