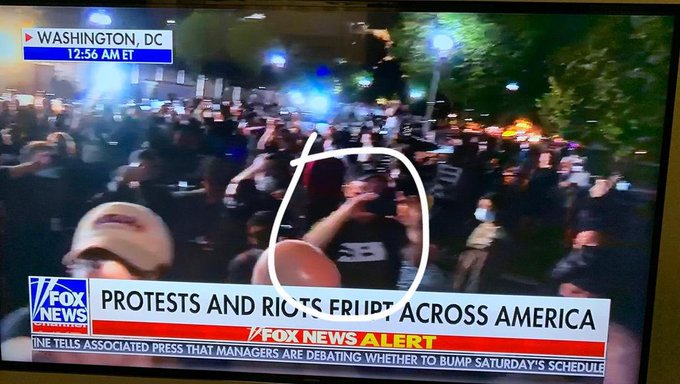 Unhinged right-wing Venezuelan opposition leaders point to Max Blumenthal’s t-shirt as evidence of a devious plot by the government of President Nicolas Maduro to spawn chaos across the US.

The Washington-backed Venezuelan opposition is showing its true colors as more than 15 US states deploy National Guardsmen to quell a growing protest movement against police brutality. And while the protest movement is growing, amid escalating police and US military violence, top figures in the Venezuelan opposition are pointing to The Grayzone founder Max Blumenthal as the secret comandante of the national uprising.

Known for its penchant for racist invective, its upper-class character, and even burning alive an Afro-Venezuelan in the streets of a wealthy Caracas neighborhood, the right-wing Venezuelan opposition reacted to the Black Lives Matter protest movement with disgust. Rather than attempt to link the struggle of black Americans to the youth of their movement, Venezuelan opposition figures on Twitter concocted an absurd narrative: the “Maduro regime” is a secret supporter of the anti-racist protests.

Their smoking gun? In a still image from a Fox News broadcast at protests outside of the White House, The Grayzone editor Max Blumenthal was seen in a t-shirt emblazoned with the eyes of late Venezuelan President Hugo Chávez, as he filmed the crowd from his cellphone.

Right wing Venezuelan opposition fanatics are claiming that secret Bolivarian govt agents are whipping up violent demonstrations in US cities.

A photo of me wearing a shirt with the eyes of Chavez. https://t.co/p5mq44Msrs

The second smoking gun? Blumenthal was photographed shaking hands with Maduro before the president hosted a solidarity meeting with activists and journalists involved with the defense of Venezuela’s embassy in Washington amid a weeks-long siege. (This reporter attended the meeting.) Blumenthal subsequently held a wide-ranging interview with Maduro that appeared at The Grayzone.

“In their deranged claims blaming me for a spontaneous national uprising against police brutality, the Venezuelan opposition has lifted its mask once again,” Blumenthal commented. “Its leadership is not only hostile to the aspirations of poor and working class Venezuelans, they worship Donald Trump and are revolted by any sign of progressive activity anywhere in the world. Just imagine the damage they would do if they somehow obtained power.”

Juan Guaido’s “Foreign Minister” blames Blumenthal-Maduro plot for “destabilization” and “violence” across the continent
On Twitter, a far-right Venezuelan journalist named Segovia Bastidas churned out classically fascist rhetoric, calling Blumenthal a “leftist parasite” and claiming the protests were “not spontaneous.”

Another opposition activist, “intelligence and security advisor” Marcelo Crovato, tweeted a photo of Blumenthal’s shirt and declared, “For those who do not believe that Chavismo is an international plague that destroys civilization and must be fought by all available means.”

He added: “anarchist communist garbage that support repression and torture in Venezuela accuse me of being on the right (OF COURSE I AM) and attack me for this tweet.”

Crovato fled justice in Venezuela after he was charged for participating in a meeting planning the erection of violent guarimbas in 2014. These makeshift street barricades, a feature of the opposition’s protests, blocked off neighborhoods from municipal control while terrorizing any leftist elements inside.

This conspiracy was also fueled by major Venezulean opposition figure Julio Borges. “The [Maduro] regime appears as a promoter of destabilization, now in the U.S.,” he tweeted in response to pictures of Blumenthal at the protest outside the White House and in Miraflores Palace. “The dictatorship uses the media and groups of vandals to promote violence. Maduro is a threat to democracy on the continent, so we have to focus on removing him from power.”

Borges is a far-right founder of the Venezuelan political party Primero Justicia, alongside oligarch Henrique Capriles and Leopoldo López, the political mentor of coup-leader Juan Guaidó. In 2019, Guaidó appointed Borges as presidential commissioner for foreign affairs to the Lima Group.

Video footage from 2017 shows Julio Borges exiting a car and fleeing the scene after it struck and killed a child.

Right-wing outfits like Dolar Today and Miami Daily were keen to reinforce the conspiracy. “ATTENTION URGENT: Chavistas infiltrated the demonstration in front of the White House,” Dolar Today tweeted. “The regime of Nicolas Maduro is intervening in the demonstrations in Washington DC.”

Dolar Today is run out of Alabama by Gustavo Diaz, a Home Depot worker who helped plan the unsuccessful coup attempt against Hugo Chavez in 2002. Dolar Today has become the main hub of black-market speculation in Venezuela, challenging the government’s official currency exchange rate.

While enjoying wide citation internationally as an authority on the issue, Dolar Today is able to manipulate the exchange rate in Venezuela while clamoring for regime change and an invasion by the US military.

Meanwhile, Miami Daily, a newspaper that uncritically parrots claims from Guaidó’s ambassador to the US, Carlos Vecchio (exposed by The Grayzone for his role in the theft of $70 million from the government), also jumped in on the frenzied conspiracies.

The publication ran an article that tried to make the case that the Sao Paulo Forum (an international gathering of leftists) was behind the protests. Again, Blumenthal’s shirt was deployed as the telltale.

Racist language against Black Lives Matter recalls the burning alive of Afro-Venezuelan Orlando Figuera
In an even more egregious case of fake news, the Miami-based Primer Informe has claimed that Haitians, Hondurans, and US activists admitted under police questioning that they were being “paid to promote chaos,” and are now facing federal prosecution.

The rightist Venezuelan opposition seems intent on attacking anybody participating in the protests with any sympathies towards Chavismo — even other Venezuelans. A tweet by an opposition member pointed to a man wearing a Venezuelan cap in Miami, claiming he joined the “hordes of savages” in that city’s protests.

The racially-tinged language and general animosity exhibited by the Venezuelan opposition toward Black Lives Matter is hardly a surprise. As right-wing vigilantes attempt to kill protesters in the US, they follow in the footsteps of Venezuela’s right-wing.

During the guarimbas that Crovato helped plan, far-right opposition hooligans burned to death Orlando Figuera, a black man they hunted down in the wealthy anti-Chavista stronghold of Altamira in eastern Caracas.

Claims by the Venezuelan opposition about secret Chavista infiltration of the national US uprising against police brutality reflect the deep resentment of its leadership to the Black Lives Matter movement, people of African descent across the Americas, and any iteration of left-wing social movements.

As President Trump prepares to designate “Antifa” (short for anti-fascist) an official terrorist organization, and his administration enacts crushing economic sanctions on Venezuela, these baseless and conspiratorial accusations only serve to ratchet up the repression.