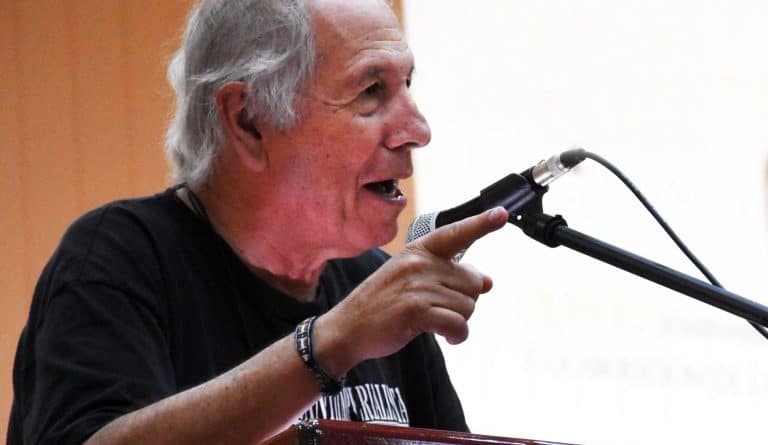 Rebelion interviews Resumen Latinoamericano editor Carlos Aznarez about the recent conference for developing a progressive communication network to counter the lies of the empire.

M.H.: Could you explain a little about how the recent communication conference in Venezuela went and what are the prospects for its success?

C.A.: I was invited to the International Communication Encounter that brought together about 140 popular communicators, counter-information analysts, and alternative media outlets from around the world but particularly from Latin America. During three days we discussed what we could do to strengthen the entire counter-information system in these moments in which Latin America is enduring terrible attacks from the U.S. Empire, as is the case of Bolivia and popular rebellions too. The urgency is to develop and connect communicators to be on a par with the moment.

Beyond creating networks and exchanging experiences, the urgent need for training was our main concern and it was strongly encouraged by the Bolivarian Government. This is why we had undertaken a project we are now calling the International Communications University that up to now has not been strong enough but the conference embraced it and passed it in the resolution.

M.H.: Where would it be seated?

C.A.: A venue would be in Venezuela but major affiliates will be in Argentina, Mexico and Brazil. The idea is to develop a series of courses and tech careers starting this year. New technologies will be useful so as to not have only on site classes but to also using teleconferencing to teach classes.

This is an ambitious project. A university is not something that can be built from one day to another. But it is progressing because we had been creating the tools to achieve it in the short term. Venezuela’s funding is very important. President Nicolas Maduro closed the encounter precisely signing this agreement for the university to start operating, as well as other issues such as extending the network of popular communicators, doing joint radio transmissions, or coordinating joint newspaper editions or websites. We need all these weapons to counteract the media terrorism torrent supporting new and old dictatorial processes in the continent as in Bolivia.

M.H..What you described is exactly how it happened in Bolivia. How did you find Venezuela?

C.A.: I think it is better now. As it is undergoing a revolutionary process, Venezuela is always behind the rest of the continent. The situation there is more similar to what happens in Cuba than in the rest of the continent, which merely achieved progressive governments. But sanctions and the blockade have always caused serious difficulties to the population. The food issue was much better this time. There is food in almost every supermarket and the CLAP boxes, distributed to communities by the State, are distributed more regularly. In the hardest moments, they were distributed every one or two months. That was the most serious time. But they are now distributed every 15 days so people can make both ends meet. Plus, food stamps are given to workers to purchase food at very low prices.

You can find things in Venezuela that you can’t find anywhere in the world, except Cuba. Concerning electricity, for instance, people pay very low rates, the same as fuel. The subway system is free most of the time so people don’t need to evade turnstiles as Chileans do.

M.H.: What about the opposition of self-declared President Juan Guaido?

C.A.: The opposition in Venezuela is seriously divided. This is an advantage for the Bolivarian Government. They are not only divided in matters of politics but they go after each other. They insult themselves via Twitter or Facebook. They make all sort of accusations but some of them are real, such as those related to corruption. Guaido made up a group of criminals and this is clear not only to the Bolivarian Government, which knew about it since the beginning, but also to opponents themselves.

We checked a large amount of Twitter accounts. You don’t need intelligence gathering, they are all there. You can go now and you’ll find one accusing the other of stealing thousands of dollars; another saying “how can we trust this scoundral Guaido;” and all of ths in their attempt to seize Venezuela’s economy, rather than having a political interest on being government. They are a gang of criminals in action and Guaido has lost considerable influence and whatever charm he may have once had among opponents. I think he’s worse than Piñera of Chile when it comes to corruption.

This opposition was not able to achieve even one little thing from the negotiating table. Negotiations with the Government that resulted in calling for legislative elections this year are no longer concessions but a positive tool for the Government to prove that Guaido and his people in the National Assembly have lost plenty of their prestige. They are definitely going to lose these elections.

So, in the face of a shaky opposition, the U.S. sanctions and international pressure is what we have left. The Lima Group failed in harassing Venezuela, the same as the Organization of American States. The Rio Treaty (TIAR), whose members recently met in Bogota trying to achieve an interventionist quasi-military measure, also failed. Elliott Abrams himself, the most hostile diplomat against Venezuela, recognized that he is working with a group of incompetent people who are virtually all criminals. They have stolen from the U.S. Administration and that’s saying something. All this helps make the Revolution remain standing.

Concerning medicines, it continues to be hard. There are the pharmaceutical industry and laboratories, but the blockade is strongly felt in this sector despite the help from China and Russia. The Russians are now supporting the transportation of oil. This has consequences on Cuba because Venezuela used to send oil to Cuba and now all shipping firms transporting oil are sanctioned, unless they are Venezuelan ships flanked by Russian warships. So far the US hasn’t stopped those. When Venezuela has outsourced to shipping firms as they did before to take the oil to other ports, these companies are sanctioned and the shipping of oil to Cuba as to other countries has been disrupted.

The Russians are helping with that and in many other issues, such as technical and logistic support at the military level. China is supporting with food and medicine. This is the circle at this moment through which Venezuela can help its population have some leve of relief. All of this is mainly affecting the poorest population but when we talk about medicine, it affects everyone. Even the opposition.