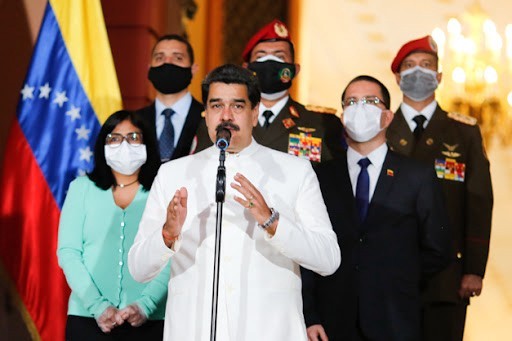 Since Europe became the focus of Covid-19 and exposed the fragility of its health systems, it began a race to keep Venezuela on the media agenda using the “humanitarian crisis” narrative and its inability to be sustained upon the arrival of the pandemic.

All the “analyses” prior to the detection of the first infections, on March 15, were based on an imaginative exercise in which an unprecedented health catastrophe loomed. The political crisis was the most powerful argument that supported the narrative of the forced migration of millions of Venezuelans last year, not to mention the blockade and unilateral coercive sanctions that have been deepening in recent years as the main cause of the collapse of the services in Venezuela.

In the country, this campaign of terror tried to be capitalized by the opposition through the parallel government of Guaidó, whose only base of operations is really virtual in order to sustain an international facade.

These media, journalists and other political operators have previously begun to take the pulse of the news through rumors. The first case of Latin American coronavirus was registered in Brazil on February 26, but a month earlier they had attributed a case to Venezuela.

More than real concern about the situation that had to be faced, the anti-Chavista info-mercenary apparatus seemed to be rubbing its hands at a possible collapse of the health system. ” What will happen to the coronavirus in Venezuela? ”,“ Venezuelan doctors fear the worst with the arrival of the coronavirus ”,“ Venezuela’s challenges in front of the coronavirus ”, among other similar ones, were headlines that circulated in international media before and after the cases were confirmed.

Before the World Health Organization (WHO) decreed the new coronavirus as a global pandemic, Venezuela established an epidemiological cordon in ports and airports in the country, after learning of the first case in Latin America (in Brazil).

The media war intensified when the first cases of Covid-19 in Venezuela were verified, this time through Juan Guaidó himself.

After President Maduro’s first press conference announcing the first infection, the self-proclaimed tried to put together an operating theater where he would “take care” of everything related to the pandemic through the social networks.

Basically, his “orders” consisted of repeating the measures adopted by the government of President Nicolás Maduro through social networks, the only bastion that he has to project himself.

Guaidó’s “measures” included social distancing and the suspension of work and academic activities which were taken into account in the context of sanctions that prevent the operation of the State’s services and care, as well as taking into account the big European picture, where the pandemic was wreaking havoc.

In this absurd competition, the only recurring refrain was to point out the state’s inability to face the tragedy to come, in addition to saying that it had a group of experts and the true balance of those infected. So far it has not shown the “real” figures it claims to have and the means it used to get them.

By all accounts, a media hoax for merely politicking purposes.

The week in which the first Covid-19 contagions were detected, a video of a nurse at the General Hospital of Guatire went viral, denouncing the lack of inputs and isolation of 11 people for suspected infection.

Considering the seriousness of the case, the health authorities came and dismantled the false accusations of the nurse. Similar situations occurred in other parts of the capital and all turned out to be false.

Another emblematic case consisted of trying to link the alleged disappearance of the president of the National Constituent Assembly (ANC), Diosdado Cabello, to a quarantine due to contagion of coronavirus. This news was denied with his appearance on his regular TV show on Wednesday nights.

As the days passed, more cases appeared that were reported at the time. The image of Guaidó was becoming a joke as the Bolivarian government was succeeding in containing the virus and in social protection for the population.

The effectiveness of the state against psychological warfare

In addition to social quarantine, the Patria system served as a powerful tool that served to systematize possible new cases of contagion. Through a survey, this technological platform that has more than 18 million Venezuelans registered, has been helping to “flatten the curve.”

Meanwhile, Juan Guaidó has been fading from social networks and is only supported internationally by corporate media.

Two weeks after the quarantine, he still predicted the “collapse”, arguing that in a few weeks Venezuela would be the country with the most cases of coronavirus. This fact contrasts with the reality offered by the contagion map in the region, where the country appears as one of the countries with the lowest rate of infection, thanks to the appropriate measures applied to contain the pandemic.

As an alternative to the state apparatus, the virtual president “launched” the José María Vargas Plan, an alternative that supposedly would face the crisis based on a study by its “experts”. Nothing is yet known of the implementation of this plan.

In this new scenario, he has also sought alternative ways to get around the criminal blockade of the United States. Recently, the Maduro government formally requested a loan from the International Monetary Fund (IMF) in the amount of 5 billion dollars to strengthen the health system.

Along the same lines, Venezuela received help from Cuba with the arrival of a medical delegation “that has had successful experience in combating the coronavirus”, and from China, which has sent three flights with medicine, specialists and other supplies to fight the emergency.

To try to gain ground in the media, Guaidó tried to star in the moment by requesting the “cessation of usurpation” and offering himself as the only legal alternative to receive the IMF loan, being the only internationally recognized “authority”.

Almost a month after quarantine, a comparative exercise is not necessary, nor should one go too deeply into comparing the effectiveness between the government of President Nicolás Maduro and the virtual presidency of Juan Guaidó to contain the pandemic.

What is clear so far is the enormous effort that has been made to prop up the narrative that Venezuela is a time bomb for the pandemic to wreak havoc. This discourse coincides with the image that was intended to be projected last year: the country as a focus of disturbance in the region.

Despite the fact that the consequences of not applying measures in time are already being felt in Brazil, Ecuador, Chile and other South American countries, they forcefully state that “the coronavirus catastrophe has an epicenter in Venezuela, forcing the international community to look towards there”.

Undoubtedly, what underlies psychological operations through the media is that the exit from Chavismo has not stopped being on the agenda, and a global pandemic, in this case, too, is a useful resource to promote it.