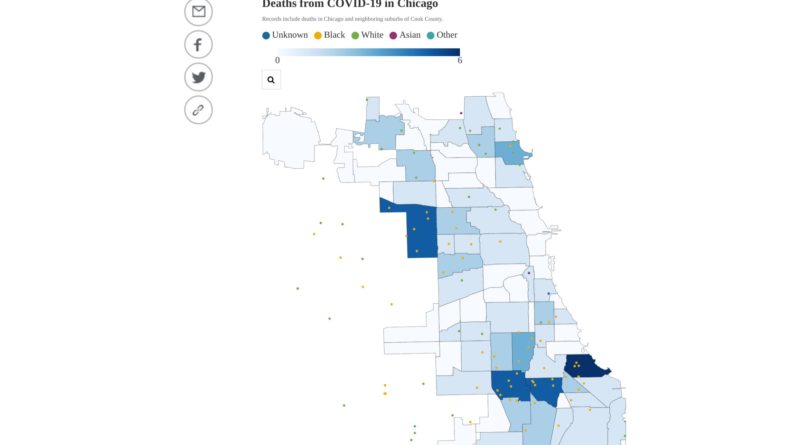 The COVID-19 virus is killing black residents in Cook County at disproportionately high rates, according to early data analyzed by WBEZ.

While black residents make up only 23% of the population in the county, they account for 58% of the COVID-19 deaths. And half of the deceased lived in Chicago, according to data from the Cook County Medical Examiner’s office.

The majority of the black COVID-19 patients who died had underlying health conditions including respiratory problems and diabetes. Eighty-one percent of them had hypertension, or high blood pressure, diabetes or both.

As the virus continues to spread, the high mortality rate for black residents is alarming.

“It’s disturbing and upsetting, but not surprising,” said Linda Rae Murray, health policy professor at the University of Illinois at Chicago. “This is just a reflection of the facts that we already know about these pandemics. People who are vulnerable will die quicker and won’t have as many resources.”

It’s still early in the pandemic and health officials are assessing information on which groups of people are being affected, Dr. Ngozi Ezike, director of the Illinois Department of Public Health, said Saturday. Ezike said she “would not be entirely surprised” if a disproportionate number of deaths were occuring in black communities.

“As we put on our health equity lens, we already know [that] before COVID was ever established that the health outcomes for various communities are already different,” she said. “So if you know those disparities exist in terms of health outcomes, you can imagine that overlaying a new disease is only going to exacerbate whatever inequities already exist.”

RELATED CONTENT: USA: When the Invisible Hand Gives You the Finger

These conditions contribute to high rates of hypertension and diabetes. In Illinois, the rate of high blood pressure for black residents is around 48%.

Some of these historical factors are raising the risks for black residents in the coronavirus outbreak, said Murray, a former official in the Chicago Department of Health and previous chief medical officer for Cook County Public Health.

That was the case for 61-year-old Patricia Frieson, a black woman who was the first person to die in Illinois from the coronavirus. Frieson, a retired nurse, died on March 16 and a week later her sister Wanda Bailey, 63, died of COVID-19. They both had hypertension or diabetes.

It can be more difficult for black residents to practice social distancing because the population is more likely to use public transit and hold jobs that can’t be done from home. In poorer communities in the city, persons of color are also more likely to live in crowded homes, experts say.

“You just have a lot of people living in a house,” said Antonio Davis Jimenez, director of the University of Illinois at Chicago’s Community Outreach Intervention Projects.

Jimenez said that many “people that we serve in the neighborhoods that we target, they can have multiple people living in a household. And so it’s really difficult to stay inside and do this thing. In fact, there’s an incentive to want to go outside.”

Murray is particularly worried about the black population that’s incarcerated during this pandemic.

The number of black residents with COVID-19 statewide is also disproportionately high. Blacks account for 38 percent of the confirmed cases in Illinois but they are only 14% of the population. The state has not released a racial breakdown for deaths, although Illinois is one of the few states that keeps COVID-19 data with a racial breakdown.

According to ProPublica, the Centers for Disease Control and Prevention typically tracks detailed data, including race, during outbreaks. But the federal agency did not respond to ProPublica’s request for data that includes a racial breakdown.

There’s been a push to get a racial breakdown of the cases at the national level, said Murray. It is important to get the data so that resources and culturally competent information can be distributed.

María Ines Zamudio is a reporter for WBEZ’s Race, Class and Communities desk. Follow her @mizamudio.

Featured image:  Deaths from Covid-19 in Chicago by neighborhood.