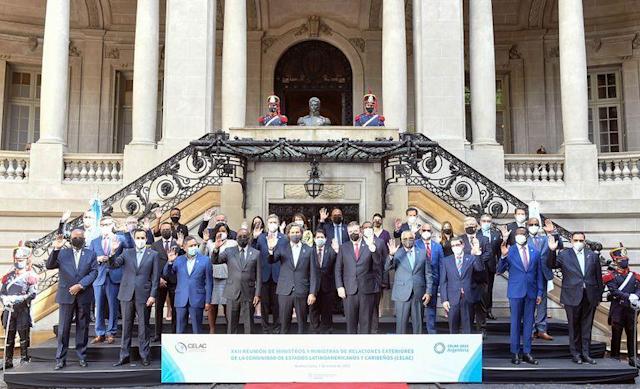 Last Friday, January 7, Argentina assumed the pro tempore presidency of the Community of Latin American and Caribbean States (CELAC) for the year 2022. The first words of the President of Argentina, Alberto Fernández, after accepting this great challenge, was to call on the people to move forward in integration and to strengthen the dialogue to continue building a region at peace. This theme of deepening Latin America integration has been the thrust of the organization for over a decade, excluding the US and Canada, but that doesn’t mean that there are no CELAC member nations to do the bidding of the empire.

“It is an honor that Argentina has been unanimously supported for the head of CELAC’s leadership for the 2022 term,” said Fernández in his speech during the plenary session of the CELAC Summit of Foreign Affairs Ministers, which was held at the San Martín Palace in the city of Buenos Aires. “We will consider that confidence as a recognition that our country is capable of articulating dialogue and consensus.”

Fernández further stated that Argentina assumes the leadership of CELAC “with the conviction of those who believe that we are all part of a Great Homeland, although many try to do the impossible to divide us and subjugate us.” And sure enough, Colombia’s Deputy Minister of Multilateral Affairs, María Carmelina Londoño, broke from the spirit of unity to criticize the “opportunistic silences” of CELAC on the human rights violations of three member nations of the organization. How ironic that this would come from Colombia, the government of which is virtually at war against its own people while turning Colombia into the top drug-trafficking country in the hemisphere. Although Londoño did not mention the countries by name, it was evident to everyone that she was referring to Cuba, Venezuela, and Nicaragua: the three countries on the top of the hit list of the US empire.

To get the meeting back on track, the foreign ministers of Nicaragua and Venezuela responded not to Colombia’s subservience, but condemned the coercive and unilateral measures promoted by the US against them as well as against Cuba that has been subject to the longest-running blockade in modern history.

It was also emphasized that the great regional mechanism, CELAC, composed of 33 countries, was not formed to oppose anyone or to confront any of the existing institutions, nor to meddle in the political and economic life of any country, This was the overriding theme carried throughout the meeting.

“It was born as a forum in favor of ourselves, which always promoted consensus and plurality in a framework of democratic coexistence without exclusions,” Argentine President Fernández highlighted.

2021 was tough, but Latin America was more united than ever before
Those present at the meeting highlighted the actions taken during 2020 and 2021 to revitalize CELAC and maintain its activities in the midst of the multiple challenges posed by the COVID-19 pandemic.

“During this difficult time, our community was able to organize the distribution and production of vaccines to contain the aggressive pace of the virus,” said the Foreign Minister of Mexico, Marcelo Ebrard. During the past two years, Mexico held CELAC’s pro tempore presidency.

In this regard, Ebrard cited the partnership between his government and that of Argentina to produce the AstraZeneca vaccine, vaccine donations to several countries in the region, and the creation of vaccines in the region, such as those developed by Cuba.

Ebrard mentioned other advances also, such as the merging of drug regulatory agencies and the creation of a network of virologists.

Much remains to be done
The countries of the region face a number of complexities, said the president of Argentina, and highlighted that Argentina has included in its work agenda a list of priorities that include the fight against climate change.

President Fernández asserted that the environment should be the focus of CELAC’s attention. “To a greater or lesser extent, we are all affected by the negative effects of climate change,” he said in his speech. “However, our insular Caribbean nations have been suffering the most worrying effects.”

In the Caribbean islands, climate phenomena affect entire populations, he stressed. “We cannot sit idly by while global warming causes irreparable damage to our people,” he emphasized.

Through coordinated strategies, “we will also work in areas such as health emergencies, integrated disaster risk management, educational exchange, the fight against corruption, and food security,” remarked Argentine Foreign Minister Santiago Cafiero during his speech.

“United we are stronger”
Argentina called upon the CELAC members for moving forward with the task ahead, strengthening dialogue, and continuing with the integration tools needed to maintain peace in the region.

“We are not starting from scratch,” said President Fernández, “we are part of a history where many leaders have left testimonies that show the world that we are deeply proud of our culture of dialogue and peace.”

The integration will be real “when the pain of one of us is the pain of all, and when the success of one of us is shared by all,” the president concluded. In this sense, he called for “Latin America and the Caribbean to be not only a geographic expression but also a political, cultural, economic and social expression, and a role model.”

Featured image: Foreign affairs ministers and other officials of the member countries of CELAC in front of the San Martín Palace in Buenos Aires that hosted the recent CELAC summit. Photo: Télam