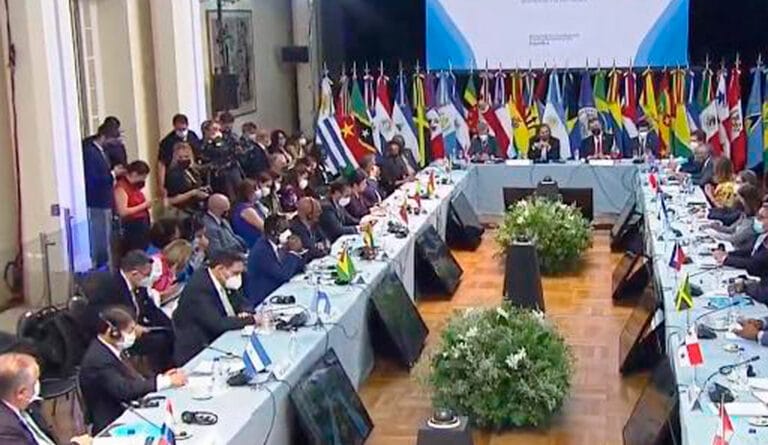 On Saturday, January 8, Venezuela’s Foreign Affairs Minister Félix Plasencia commented on the speech by the Colombian representative at the 22nd Summit of the Foreign Affairs Ministers of the CELAC, held in Buenos Aires, Argentina. In an attempt to criticize other countries in the region over issues of human rights violations, Colombia seemed to have been denouncing itself for its multiple human rights violations against both Colombian citizens and foreigners, remarked Plasencia.

“It seems paradoxical that,” commented Minister Plasencia, “in a speech that tried to attack its neighbors, Colombia seems to have denounced itself, given that so many human rights violations were committed in 2021 by the misgovernment of Iván “Massacre” Duque, whose only legacy will be to have torpedoed the Peace Accords.“

In 2021, 96 massacres were registered in Colombia, in which 335 people were murdered. This was reported by the Colombian NGO Institute for Development and Peace Studies (INDEPAZ). The organization has already reported on two new massacres at the start of 2022, in one of which three Venezuelans were killed.

On Friday, January 7, during the 22nd Summit of Foreign Ministers of the CELAC, the Deputy Minister of Multilateral Affairs of Colombia, María Carmelina Londoño, denounced the “inaction” of CELAC in the face of supposed human rights violations in some member countries.

Despite such comments on the part of Colombia, Plasencia ironically commended Colombia’s participation at the summit.

“We welcome that the representative of Duque has finally decided to participate in the CELAC meeting instead of sneaking out through the backdoor, as she did in Mexico,” wrote Plasencia on Twitter. “Although we understand that she has been there to exercise the sad role as US spokesperson for the putschist agenda of the OAS.”