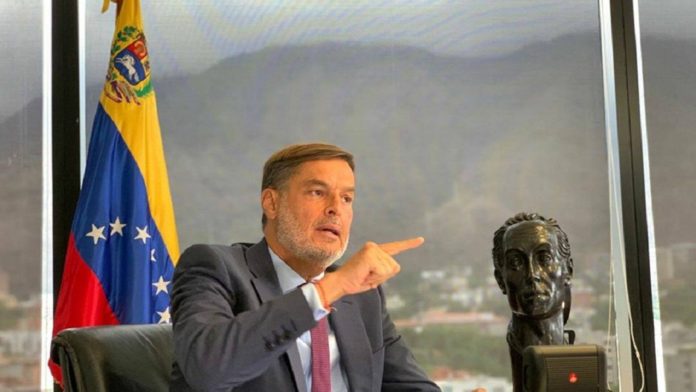 Venezuelan Foreign Affairs Minister, Félix Plasencia, responded firmly to the statements of the spokesperson for the United States government based in Colombia, James Story, who had referred to the electoral process held in Barinas state on January 9.

Through his official Twitter account, the Venezuelan minister for foreign affairs questioned that the representative of the Biden administration tried to “congratulate” the people of Barinas on the electoral process, after being the main promoter of actions against the legitimate government of Venezuela and the boycott of electoral processes.

Likewise, Plasencia added that “all the elected authorities in Venezuela enjoy the credibility and trust that our robust electoral system offers. Which, by the way, leaves no room for self-proclamations or for those who seek to assault power by way of aggression and imperial threat.”

In the message posted on Twitter by James Story, he launched accusations about alleged irregular practices. However, by affirming that the “will of the voters” prevailed, he admitted that it is a valid process conducted by the electoral authority of Venezuela.

James Story’s mission
Although James Story calls himself the United States ambassador to Venezuela, he is actually based in Bogotá, from where he directs coordinated operations with the extreme right in Colombia and Venezuela, directed against the government of President Nicolás Maduro.

Frequently, the Washington spokesperson meets with spokespersons from the opposition sector represented by former deputy Juan Guaidó, as well as fugitives from justice like Leopoldo López and Julio Borges.

In June 2021, he reported that Venezuela was not included in the list of countries to which the White House would donate COVID-19 vaccines. However, seven months later, Venezuela is already close to having 95% of its population vaccinated with at least one dose, and has initiated vaccination with booster shots, thanks to cooperation with China, Russia and Cuba.

At that time, the head of state, Nicolás Maduro, condemned the “miserable” position that Story adopted, with his expressions of hatred and contempt against the Venezuelan people. He had also ratified that the nation is and will continue to be, above all, rebellious, free and sovereign.