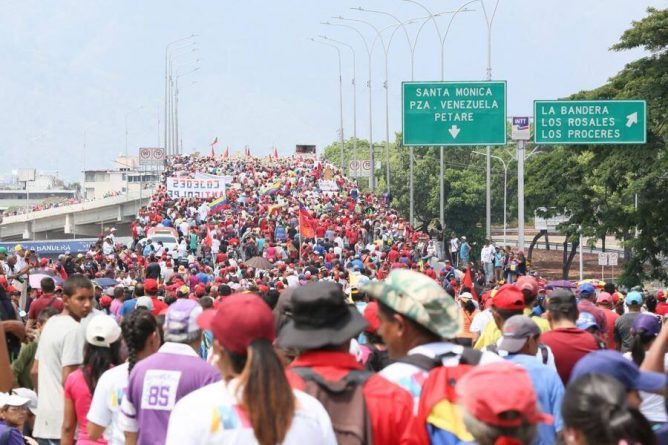 Today in Caracas, a few hours after the failed coup d’etat lead by the self-proclaimed Guaido and his boss Leopoldo Lopez, two marches were called. One from the Chavista forces to celebrate the International Workers Day and to defend the Revolution and the other one called by Anti-chavista forces to finish what they called “Maduro’s Usurpation” and to take the Miraflores Palace.

For a second day in a row, Orinoco Tribune toured all over Caracas to present a perspective from both mobilizations. The Chavista march was among the biggest demonstration we have recorded and the anti-chavista concentration in Altamira had roughly half the turnout of their demonstration yesterday.

In the Anti-chavista demonstration, besides the reduced number of attendees, you could feel tension and more aggressiveness than the one we felt the day before at the same place. The Bolivarian National Guard deployed barriers to stop the demonstrators from blocking the highway. They tried by all means to break the fences and in doing that, there were two altercations we witnessed.

4 Videos Below: Click at the right arrow to switch among them.

Arriving at Altamira, skirmish close to La Carlota and leaving Altamira. Antichavistas got half the turnout they got yesterday.

Gun shots were heard, we believe they were from rubber bullet rifles or tear gas launchers since there were no wounded protestors besides 2 youths being helped by the Venezuelan version of the Syrian White Helmets afterwards. The White Helmets with green crosses are supposedly the first aid paramedics from the UCV. It was not clear what kind of wound they had. At the Chavista march we were lucky to witness its length from Parque Central to La Bandera exit near el Valle (5 Km according to Google maps) and from there we went to cover the Anti-chavista demonstration in Altamira.

Then we rejoined the Chavista demonstration close to Miraflores Palace and we witnessed the last part of Maduro’s speech that was very brief. There was a long wait for him and that made us feel at some point that something might have gone wrong but that was not the case.

On our way out of the demonstration we met with Tom Burke from Freedom Road Socialist Organization, currently on a delegation in Venezuela, and with Dozhtor Zurlent, a Venezuelan activist with heavy roots in the Midwest USA. We agreed to meet with them before they leave the country to have an OT interview.