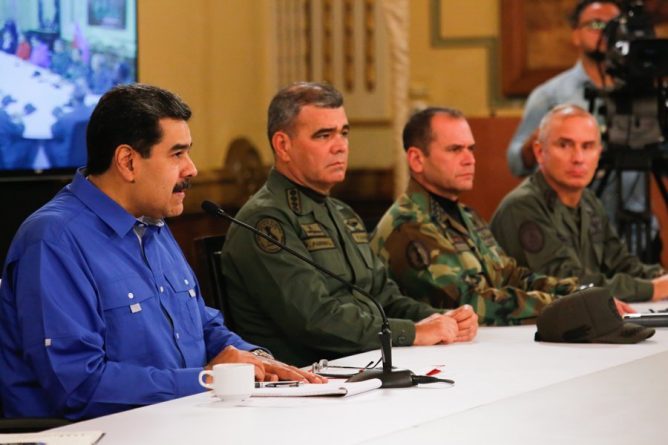 News Security and Defense
May 2, 2019May 2, 2019 orinocotribune chavismo bravio, coup d’etat, failing coup, Trump not knowing what to do, US Imperialism

Venezuelan President Nicolás Maduro reported eight injured officials during the skirmishes at the Altamira Distributor in Caracas, as a result of the attempted coup on Tuesday. Of these, three are police officers and five are officers of the Bolivarian National Armed Forces (FANB), including two colonels who are in serious condition from gunshot wounds.
Maduro was emphatic when he stated that he expressly ordered the officers who came to the site not to favor a military engagement on the Francisco Fajardo highway. Those involved had to surrender peacefully.

In this regard, he reported that the rebels’ response to the tear gas was live fire, including high-caliber weapons, including four 7.66 millimeters AFAG machine guns with which they also tried to create anxiety by pointing them at the highway .

Maduro also announced that the Attorney General, Tarek William Saab, appointed three prosecutors “who are directing the investigations and criminal accusations that will go before the Courts of Justice” against the actors who staged the attempted coup.

“You have to identify all those people who fired and bring them to justice. There can not be impunity! There must be justice for there to be peace in Venezuela! “The President of the Republic exhorted.

He stressed that initially Leopoldo López led the coup attempt.

He presented two videos in which he showed part of the weapons that rebel military had.

He also showed the testimony of several of the military who claimed that, under false pretenses, they were taken to the Altamira Distributor from the headquarters of the Bolivarian National Intelligence Service (Sebin) in El Helicoide, to allegedly participate in a high-risk operation in prison of Tocorón .

He said that these uniformed soldiers, when noticing the presence of Juan Guaidó and Leopoldo López in the place, were leaving. Initially, Sebin officials left, then those of the National Guard and each of the eight VN-4 anti-riot tanks of the Bolivarian National Guard went to their military units.

He asserted that they were leaving the coup leaders alone, leaving some 20 officials fully identified “for giving their souls to the Venezuelan ultra-right and that will be used and abandoned like the military in Colombia (…) You will see the fate of traitors to the oath, the cause, the legacy, the Constitution and our people. ”

Likewise, Maduro confirmed the return of Gustavo González López to the leadership of the Sebin, following the dismissal of Manuel Ricardo Cristopher Figuera, who was a participant in the coup plot.

He instructed the sectoral vice-president of Communication, Culture and Tourism, Jorge Rodríguez, to disseminate evidence of the coup attempt in the coming days because “we must show the full truth of the armed and violent action”.

He congratulated the Fanb for their loyalty
The head of state also highlighted the performance of the Bolivarian National Armed Forces, in the midst of the civil-military rebellion led by the opposition leader, Juan Guaidó.

On the military operation, the president said the following: “I want to congratulate you for the firm, loyal, courageous attitude, of enormous wisdom with which you have led the resolution and defeat of the small group that tried to inject violence into the coup and asked the people of Venezuela to applaud these loyal, steady, obedient, disciplined FANB, subordinated to the Constitution and its Commander in Chief “.

During his speech, Maduro reiterated that the Generalissimo Francisco de Miranda air base (La Carlota) was never taken, as several media reported from dawn. In this regard, he condemned the position assumed by some of these media that spread the false news. “Right there was the news that the military base of La Carlota was taken. It was never taken! ” he clarified.

He argued that the military bases of the country, including this one, “were on alert, loyal to the Revolution, the Commander in Chief and the Constitution” and as the operations center, the officers must take care of their facilities and avoid damage like that which occurred in 2017.

By way of reflection, the head of state expressed the following: “Today (Tuesday) has been an intense day, reflecting on what Venezuela should be, there was a day of contrast between the Venezuela of peace and the Venezuela of violence, of violation of political rights, of the Constitution, of coups d’état “.

He reiterated his complaint that, as in previous opportunities, the radical right sought a confrontation between Venezuelans to encourage military intervention in the country. “They do not have pacific or democratic pretensions, they want through violence to impose themselves (…) they wanted an armed confrontation,” he said.

Finally he called for dialogue and national understanding through peaceful means. “We have to settle our differences in peace,” he exhorted.