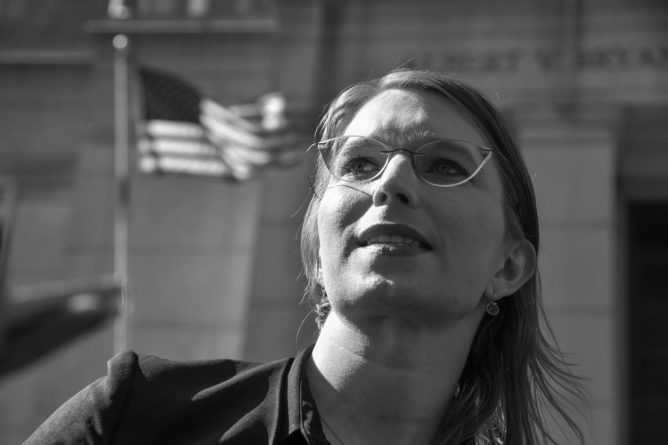 Today, Chelsea Manning’s legal team asked the Fourth Circuit Court of Appeals to release her from jail, pending her appeal because the District Court failed to consider evidence that would excuse her from having to give testimony before the grand jury.

Ms. Manning was subpoenaed to testify before a grand jury in the Eastern District of Virginia in early March. She asserted that answering questions before the grand jury would violate her constitutional and statutory rights. Without commenting on Ms. Manning’s arguments, District Court Judge Claude Hilton ordered her confined for the term of the grand jury, or until she agrees to give testimony. Ms. Manning appealed the ruling to the United States Court of Appeals for the Fourth Circuit on Friday March, 29th, and now asks for bail pending determination of the appeal. Release must be granted as long as the appeal is neither frivolous nor a delay tactic.

Ms. Manning has been held in “administrative segregation” at the Alexandria Detention Center since March 8, 2019, under conditions that amount to prolonged solitary confinement, something Juan Mendez, former UN Special Rapporteur on Torture, has said “must be absolutely prohibited, because it always amounts to cruel, inhuman or degrading treatment, and may even constitute torture.”

A witness may be civilly confined in order to coerce cooperation with the grand jury, but may not be punished. Since the conditions of her confinement have now become punitive, Ms. Manning contends, the Circuit should order her release.

According to Ms. Manning’s attorney, Moira Meltzer-Cohen, “This is the strongest appeal of a grand jury contempt I have ever seen, and so release ought to be granted. The lower court acted without considering clear legal mandates and this error, including the denial of release, must be corrected in the appellate court.”