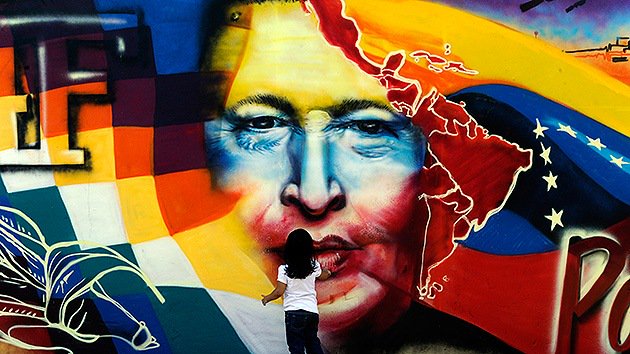 Yes, the latest research confirms that Venezuela is so rich in natural resources, that it could single-handedly satisfy all global demand for oil, for over 30 years. And it has much more than oil to offer, in its Orinoco basin and in other areas of the country.

But it is not all ‘about oil’; actually, far from it.

Those who believe that what propels the spread of Western terror all over the world, are just some ‘business interests’ and legendary Western greed, are, from my point of view, missing the point.

I noticed that such individuals and analysts actually believe that ‘capitalism is responsible for everything’, and that it creates the culture of violence of which, both victims and victimizers, already became hostages to.

After working in all corners of the world, I am now more and more convinced that capitalism is actually the result of Western culture, which is predominantly based on expansionism, exceptionalism and aggression. It is also constructed on a deeply rooted desire to control and to dictate. Financial/monetary greed is just a by-product of this culture which has elevated its superiority to something that could be defined as religious, or even religiously fundamentalist.

Or in other words: belief in its own superiority is actually now the main religion in both Europe and North America.

What makes the Libyan, Syrian and Venezuelan scenarios so similar? Why was the West so eager to viciously attack, and then destroy these three, at the first glance, very different countries?

The answer is simple, although it is not often uttered in the West; at least not publicly:

‘All three countries stood at the vanguard of promoting and fighting with determination for such concepts as “pan-Africanism”, “pan-Arabism” and Patria Grande – essentially Latin American independence and unity.’

Gaddafi, Al-Assad and Chavez have been, regionally and internationally, recognized as anti-imperialist fighters, inspiring and giving hope to hundreds of millions of people.

Gaddafi was murdered, Chavez was most likely killed as well, and Al-Assad and his nation have been, literally and for several long years, fighting for their survival.

The current Venezuelan President Maduro, who is determinedly loyal to the Bolivarian revolutionary ideals, has already survived at least one assassination attempt, and, is now facing direct mafia-style threats from the West. At any moment, his country could get attacked, directly or through the Latin American ‘client’ states of the West.

It is because Africa, the Middle East and Latin America have been considered, and for centuries treated, as colonies. It is because whenever people stood up, they were almost immediately smashed into pieces by the iron fist of Western imperialism. And those who think that they are in control of the world by some divine design, do not want things to change, ever.

Europe and North America are obsessed with controlling others, and in order to control, they feel that they have to make sure to exterminate all opposition in their colonies and neo-colonies.

It is a truly mental state in which the West has found itself; a state which I, in my earlier works, defined as Sadistic Personality Disorder (SPD).

To get the complete picture, one also has to recall Indonesia, which was literally liquidated as an independent and progressive nation, in 1965. Its internationalist president Sukarno (father of the Non-Aligned Movement, and close ally of the Communist Party of Indonesia – PKI) was overthrown by the handpicked (by the West), treasonous, intellectually and morally deranged, General Suharto, opening the door to turbo-capitalism, and to the unbridled plunder of the natural resources of his nation. Once a guiding light for the entire Asian independence struggle, after the US/UK/Australia-orchestrated extreme genocide, Indonesia has been reduced to nothing more than a lobotomized and dirt-poor ‘client’ state of the West.

In Washington, Regime Change Is Truly and Urgently Needed!
The West has an incredible capacity to identify true regional independence leaders; to smear them, to make them vulnerable by inventing and then upholding so-called ‘local opposition’, and later, by liquidating them and with them, also their countries and even their entire regions.

Sometimes, the West attacks particular countries, as was the case with Iran (1953), Iraq, or Nicaragua. But more often, it goes directly for the ‘big fish’ – leaders of regional opposition – such as Libya, Indonesia, Syria, and now, Venezuela.

Many defiant individuals have literally been murdered already: Gaddafi, Hussein, Lumumba, and Chavez, to name just a few.

And of course, whatever it does, the West is trying to destroy the greatest leaders of the anti-Western and anti-imperialist coalition: Russia and China.

It is all far from only being about oil, or about profits.

The West needs to rule. It is obsessed with controlling the world, with feeling superior and exceptional. It is a game, a deadly game. For centuries, the West has been behaving like a fundamentalist religious fanatic, and its people have never even noticed that their world views have actually became synonymous with exceptionalism, and with cultural superiority. That is why the West is so successful in creating and injecting extremist religious movements of all denominations, into virtually all parts of the world: from Oceania to Asia, from Africa to Latin America, and of course, to China. Western leaders are ‘at home’ with Christian, Muslim or even Buddhist extremists.

But Syria has managed to survive, and up to today it is standing. The only reason why the government forces are not taking the last terrorist bastion, Idlib, yet, is because the civilian population would suffer tremendous losses during the battle.

Venezuela is also refusing to kneel and to surrender. And it is clear that if the West and its allies dared to attack, the resistance, the millions of people, would fight for the villages and countryside, and if needed, would withdraw to the jungle and wage a guerilla liberation war against the occupiers, and against the treasonous elites.

Washington, London, Paris and Madrid are clearly using an extremely outdated strategy: one that worked against Libya, but which failed squarely in Syria.

Recently, in Syria, near the frontline of Idlib, two top commanders told me that they are fighting “not only for Syria, but for the entire oppressed world, including Venezuela.” They clearly detected that the West is using precisely the same strategy against Caracas, which it tried to use against Damascus.

Now, Venezuela is also suffering and fighting for the entire oppressed world.

The destruction of Libya had already brought a tremendously negative impact on Africa. And it has opened the doors to the renewed and unbridled French plunder of the continent. France was promptly joined by the U.K. and the U.S.A.

Syria is the last bastion in the Middle East. It is all there is now, resisting the total control of the Middle East by the West. Syria and Iran. But Iran is not yet a ‘front’, although often it appears that soon it might become one.

Venezuela cannot fall, for the same reasons. It is at the northern extreme of South America. Below, there is an entire continent; terrorized by Europe and North America, for decades and centuries: brutalized, plundered, tortured. South America, where tens of millions used to be exterminated like animals, forced to convert to Christianity, robbed of everything and ordered to follow bizarre Western political and economic models.

In Brazil, the progressive socialist government of the PT had been already overthrown.

If Venezuela falls, everything could be lost, for decades, maybe even centuries.

And so, it will fight. Together with those few other countries that are still left standing in this ‘Western Hemisphere’; countries which the dictators in Washington D.C. openly describe as ‘their backyard’.

Caracas stands and fights for the vast slums of Peru, for destitute millions in Paraguay, for Brazilian favelas, for privatized aquifers and the murdered rain forest in Brazil.

As Syria has been fighting for the Palestine, for the destitute minorities in Saudi Arabia and Bahrain, for Yemen, for Iraq and Afghanistan – two countries robbed of almost everything by NATO.

Russia has already showed what it can do for its Arab brothers, and now is demonstrating its willingness to support its another close ally – Venezuela.

China is rapidly joining the coalition of anti-imperialist fighters, and so is South Africa.

No – Venezuela is not only about oil.

It is about the West being able to close access to the Panama Canal, by Chinese ships.

It is about the total control of the world: ideological, political, economic and social. About liquidating all opposition in the Western hemisphere.

If Venezuela falls, the West may dare to attack Nicaragua, and then the bastion of socialism and internationalism – Cuba.

That is why it – Venezuela – should never be allowed to fall.

The battle for Venezuela is now already raging, on all fronts, including the ideological one. There, we are not only fighting for Caracas, Maracaibo or for Ciudad Bolivar: we are fighting for the entire oppressed world, as we did and are doing in Damascus, Aleppo, Homs and Idlib, as we may soon have to do in many other cities, all over the world. For as long as Western imperialism is alive; for as long as it is not going to give up its dreams of controlling and ruining the entire planet, we cannot rest, we cannot let down our guard, we cannot celebrate final victory in any part of the world.

Therefore, this is all far from being ‘just about oil’. It is about the survival of our planet.

This article was originally published on New Eastern Outlook.

Andre Vltchek is a philosopher, novelist, filmmaker and investigative journalist. He has covered wars and conflicts in dozens of countries. Four of his latest books are China and Ecological Civilization with John B. Cobb, Jr., Revolutionary Optimism, Western Nihilism, a revolutionary novel “Aurora” and a bestselling work of political non-fiction: “Exposing Lies Of The Empire”. View his other books here. Watch Rwanda Gambit, his groundbreaking documentary about Rwanda and DRCongo and his film/dialogue with Noam Chomsky “On Western Terrorism”. Vltchek presently resides in East Asia and the Middle East, and continues to work around the world. He can be reached through his website and his Twitter.

Featured image is from CADTM