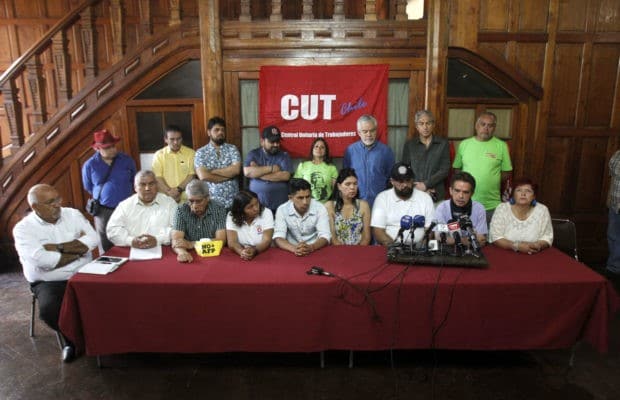 November 24th.- Social organizations have called for a new work stoppage this Monday, and the Central Unitary Workers Union (CUT) is calling for a general strike on Tuesday to demand, among other things, an increase in the minimum wage and pensions to 500,000 pesos.

On Sunday, the official call for the progressive General Strike was launched, scheduled for Monday, November 25 and Tuesday, November 26.

Dozens of social organizations called on the population to participate in the paralysis of various productive and service activities throughout the country, along with pots and pans and other protest actions.

The president of the Central Unitary Workers Union (CUT), Bárbara Figueroa, called on the government to accept the demands that weeks ago were sent to Piñera, but so far there has been no response or even a call for dialogue.

“There are long-term demands such as the new Constitution via a constituent assembly; there are demands on the right to health, education, housing, the right to collective bargaining, among others, but there are also very precise demands: a minimum liquid salary of 500,000 pesos ($6253) for the public and private sectors, a minimum pension equivalent to this salary and if the authority would give clear signals, then what we expect is that there will be an ambitious social agenda, much more powerful than what has been put on the table so far.”

In this regard, the workers belonging to the Port Union, announced that they will fully stop their activities during this Monday and Tuesday, in response to the call for a general strike, in the context of social demonstrations that already have continued for more than a month.

Jorge Salazar, spokesman for the Port Union of Chile, added that the sector’s officials oppose eventual constitutional agreements generated in the National Congress.

“We are leaving on Monday at 8 a.m. to go to the 24 terminals where the Ports will be completely paralyzed, adding to the decisions that have been taken here. There is an urgent petition to the government; however we have not had any response. We believe that a strike like the 12N strike, has to be the next step to advance the process that Chile is going through today.”

The union leaders stressed that this new General Strike will concentrate the first two days to the Port Union and some trade unions. While starting on Tuesday the 26th the rest of the organizations will go out, including among others the 16 unions of the public sector.