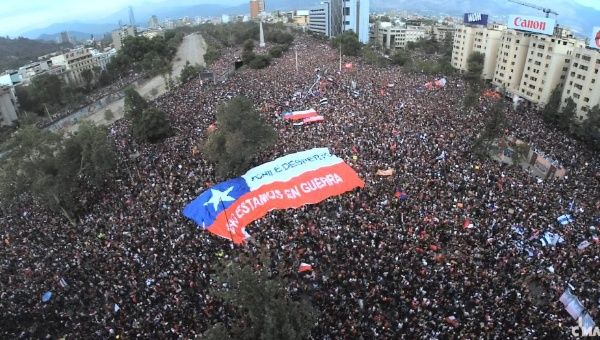 Protests that started over a hike in public transport fares boiled into massive marches. The government responded with heavy repression. At least 18 people have been killed, hundreds have been injured, and over 7,000 arrested.

Over one million people are marching in the streets of the Chilean capital, responding to the convocation of students and labor unions who organized on social media “The Largest March in Chile” on Friday afternoon, with rallies paralyzing major cities.

The march started between 5-6 p.m., local time, from the Plaza Italia, demanding among others the government to send back the Armed Forces to their military base, and to convoke a Constituent Assembly in order to outline a new Constitution.

They are holding banners like “Chile woke up” and “We are not at war,” as Chile’s military has taken over security in Santiago, a city of 6 million now under a state of emergency with night-time curfews.

“These protests were necessary,” said fruit vendor Sergio Perez to Reuters. “But they’ve made everything difficult, especially getting around.”

Many shops and schools in downtown Santiago remained closed.

Many bus drivers in Santiago also staged a walk-off on Friday after one of their number was shot.

“I used to take one bus to get to work, now I have to take four. This must stop,” said Julio Herrera, 71, as he waited in a long line at a street corner for what few buses remained.

On Friday morning, trucks, cars and taxis also slowed to a crawl on major roads, honking horns, waving Chilean flags and bearing signs of protest. “No more tolls! Enough with the abuse!” read bright yellow-and-red signs plastered to the front of vehicles.

Pinera, a billionaire businessman, told the nation on Thursday he had heard “loud and clear” the demands of Chileans.

He has sent lawmakers legislation to overturn a recent hike in electricity rates, and called for reforms to guarantee a minimum wage of US$480 a month and introduce state medical insurance – only in the case of “catastrophes.”

Seated with a group of elderly Chileans over lunch on Friday, Pinera put finishing touches on a bill to hike minimum pensions by 20 percent. “We must approve these projects with the urgency that Chileans demand,” Pinera said.

So far, the biggest rallies, according to the interior ministry’s estimate, took place on Wednesday, with 424,050 people rallying nationwide.

An online poll conducted by local company Activa Research of 2,090 people between Oct. 22-23 found 83 percent of respondents said they supported the goals of the demonstrators.

The principal causes of the protests were low salaries, utility prices, pensions and economic inequality, the poll said.

U.N. human rights chief Michelle Bachelet, former social-democrat President of Chile, said she would send a mission to her homeland to investigate allegations of rights violations by security forces.

The Chilean government said it would welcome a U.N. delegation, along with representatives of global NGO Human Rights Watch.