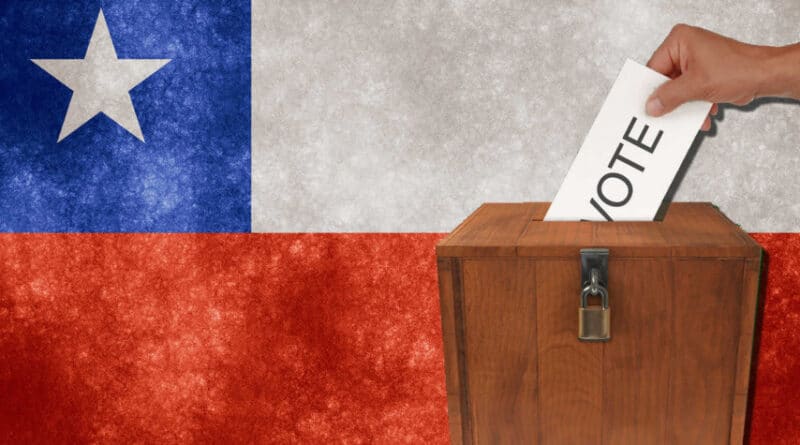 In the upcoming presidential ballot on 19 December, Chileans will be asked to choose between a far-right Pinochet apologist and a social democrat – not, as outlets like the Economist and Financial Times have claimed, between ‘two extremists’ offering different variants of populism.

In the first round of the elections on 21 November, which drew only 47% of the electorate to the polls, José Antonio Kast – a member of the Chamber of Deputies who founded the nationalist Republican Party – won a majority with 1.96 million votes (28% of votes cast). In close second, with 1.8 million votes, was Gabriel Boric: also a member of the Chamber of Deputies, a former student leader turned candidate of the Apruebo Dignidad, which includes the ‘new left’ coalition Frente Amplio and the electoral pact Chile Digno, composed of the Communist Party, ecologists, regionalists and the Christian left. Commentators were once again dumbfounded. How, after a popular uprising against neoliberalism and Pinochet’s constitution, could an unashamed neofascist win the largest share of the vote?

In 2017 Kast had run as an independent to the right of current President Sebastián Piñera, coming in fourth place with half a million votes (almost 8%). This time round, he more than tripled his support, capitalizing on the 1.6 million-strong electoral base that voted rechazo (‘reject’) in the October 2020 plebiscite on writing a new constitution. He managed to raise his profile by appearing constantly on talk shows – where he proposed digging ditches on the border to keep immigrants out – and forming an alliance with evangelicals against ‘gender ideology’. Boric, on the other hand, stood on a measured social democratic platform that included a national health system, a new pension scheme, and a national care system with subsidies for domestic labour. He received the same number of votes as when he ran in the Apruebo Dignidad primaries, where he beat the Communist candidate Daniel Jadue by a significant margin.

As the results came in, the center-left began to panic. Candidates from the ‘renovated’ right and the ex-Concertación – which has ruled Chile for most of the past thirty years – secured 24%. In addition, an independent representing the aspirational popular and middle classes, Franco Parisi, who founded the Partido de la Gente (Party of the People), a populist formation that pledged to alleviate the pressures on consumers and entrepreneurs, got 12.8%. Given this electoral landscape, Boric is faced with a choice: either court centrist voters, peeling them off from the far-right, or pitch himself to the 53% of people who opted out of the electoral system altogether (most of whom come from the popular classes and have been marginalized or neglected by parties from across the political spectrum).

Voter turnout figures have progressively decreased since Chile’s transition to democracy in 1990. The initial euphoria of free elections after the dictatorship was quickly replaced by apathy, thanks to the unresponsiveness of successive center-left governments. Frente Amplio, a coalition rooted in the 2011 student movements with which Boric was associated, initially seemed to offer an alternative – yet it too has shed its disruptive character for a more ‘mature’ and ‘responsible’ politics. Leftist critics have long described Boric as amarillo (‘yellow’) because of his tendency to avoid confrontation and adopt servile, middle-of-the-road positions. It was therefore unsurprising that, once the campaign got underway, he decided to cater primarily to establishment voters worried about the destruction of property that ensued from the uprising of October 2019.

Kast’s politics run in the family. His father, Michael Kast, was a Nazi soldier who managed to escape to Chile after the war with fake documents from the Red Cross, while his eldest brother, Miguel, was a Chicago Boy who worked for Pinochet, serving as the head of Odeplan during the late seventies (overseeing the neoliberal adjustment plan), then as the Minister for Labour in 1980, and finally as President of the Central Bank in 1982. José Antonio studied law and has been in politics since 1996, first as a city council member in rural Buin, then as a representative to the Chamber of Deputies for four consecutive terms. He was a long-time member of UDI, the party founded in 1983 by the jurist and Pinochet adviser Jaime Guzmán, until he resigned in 2016 to organize among elites who wanted to revive the former dictator’s legacy. In collaboration with the global Alliance Defending Freedom (ADF), an organization founded by Alan Sears that has brought together Catholic and evangelical representatives to protect the traditional family, Kast assembled an international summit of ultra-conservative politicians to discuss Chile’s future. In 2019 he launched the Republican Party, which now works with the evangelical right in Congress.

Kast’s 2021 presidential programme – promising to ‘restore order’ and reclaim Chile from an alleged communist insurgency – included proposals to lower corporate taxes and eliminate inheritance tax; grant legal immunity to the armed forces and fund the legal defense of police officers accused of using excessive force; give the President sweeping powers to crack down on dissent; establish an International Anti-Radical Left Coalition to ‘identify, arrest and prosecute radicalized troublemakers’; shut down the Human Rights Institute; exit the United Nations; repeal the ILO Convention No. 169 on indigenous peoples; and eliminate the Ministry of Women, offering financial incentives for heterosexual marriage while erasing ‘gender ideology’ from the education curriculum.

Meanwhile, Boric pursued the failed strategy of trying to defeat the far-right on its own terrain. He secured the backing of the Christian Democratic Party after meeting with its leaders and sought to win over the business moguls at the Confederation of Production and Commerce (CPC), opening talks to quell their ‘legitimate anxieties and fears’. Rejecting the popular demand to liberate all those jailed during the uprising, Boric has called for a tough line against protesters accused of ‘burning and looting’, even though such allegations have in many cases been confected by police (indeed, five separate reports have documented human rights violations perpetrated by carabineros and cases of intra marcha agents involved in acts of vandalism, including the destruction of Santiago’s Hotel Principado). As a representative in the lower house, Boric approved the ‘anti-barricade law’ that criminalized protest by imposing prison sentences between two months and five years on those who occupy public spaces or build blockades. He later apologized for backing the reform, conceding that it gave more arbitrary power to police and judges, yet he refuses to support pardons for those who have been jailed because of it.

Boric has been both praised and criticized for his conciliatory attitude towards the right. A month after the uprising in 2019, he was one of the opposition leaders invited by the government to negotiate the terms of the constituent process. A conversation he started in a men’s bathroom with the far-right Senator Juan Antonio Coloma ended fifteen hours later with a ‘social peace agreement’ signed at 2am. This deal stipulated that a two-thirds supermajority in the Constitutional Convention was required to approve new constitutional articles – giving effective veto power to elite interests – and created an obligation to respect existing commercial treaties. (Since then, President Piñera has been pressuring Congress to fast-track the ratification of TPP11, which would force the state to pay crushing fines to private companies for nationalizing natural resources).

Following his swerve to the center-right, Boric has ingratiated himself with the ex-Concertación and even with the government coalition, whom he implores to unite against the threat of fascism. His new campaign manager for the 19 December election, Izkia Siches, has announced that Boric’s government would retain the current Undersecretary for Health, Paula Daza (who asked for unpaid leave to campaign for Kast). Siches also said they would consider bringing on board the other right-wing presidential candidate and former Piñera cabinet minister, Sebastian Sichel. As a result, this electoral alliance can only come at the cost of abandoning the struggle against the neoliberal model and the parties that have administered it for three decades. Although Boric’s coalition is nominally antifascist, his campaign’s decision to incorporate figures like Daza, and its intention to grant more legal power to police and judges, undermines any ostensible commitment to democracy. If this neoliberal ‘Antifa’ can achieve anything, it will most likely be a reconfiguration of establishment forces, aiming to implement what Boric calls a ‘responsible transformation’ that eclipses the radical energies unleashed in 2019.

While Kast’s vote share is expected to reach 40% in the next round, given that all right-wing parties have endorsed him, Boric has the support of all the parties of the ex-Concertación, even if some Christian Democratic leaders remain sceptical. Parisi has refused to endorse Kast but is so far silent on Boric. Nevertheless, the ‘Antifa’ strategy appears to be yielding results, with polls putting Boric three to 13 points ahead of his rival. At this rate, the social democrat is set to win by a comfortable margin; although a legislative stalemate is inevitable since right-wing parties have captured half the seats in both houses of Congress.

Because the new constitution is scheduled to be ratified in September 2022, Boric will either have to start implementing it by decree or delay its enactment until the congressional arithmetic changes. If he chooses the second option, he will provoke widespread anger and frustration among the working class. This may open the door for Kast, who stands to gain from a further erosion of trust in liberal democracy. With a deadlocked Congress, and a social democratic President who may be unwilling to govern by decree to avoid being called a tyrant, prospects for the transition to a new sociopolitical order look grim. A pressure cooker has once again been placed on the stove.

If hope is to overcome fear and paralysis, new political mechanisms will be required to loosen the grip of reactionary forces and radically redraft the Constitution. In recent months the Convention has heard testimony from popular organizations demanding local decision-making power and direct democratic procedures to decentralize power, protect the environment and fight corruption. Giving citizens the right to initiate legislation, repeal corrupt laws, cancel extractivist projects and recall representatives would not only enable urgent structural transformations (such as repealing the ‘save-for-yourself’ pension system), but also set a proper pace for them. The move from a neoliberal model to a social democratic one requires intensive legal and policy work, not by halting negotiations and political immobility. For the truth is that Boric’s hoped-for ‘stability’ is elusive. Delaying the passage of essential socioeconomic reforms will not prevent future eruptions of popular discontent; it will only imperil the fragile status quo to which the establishment is so attached.