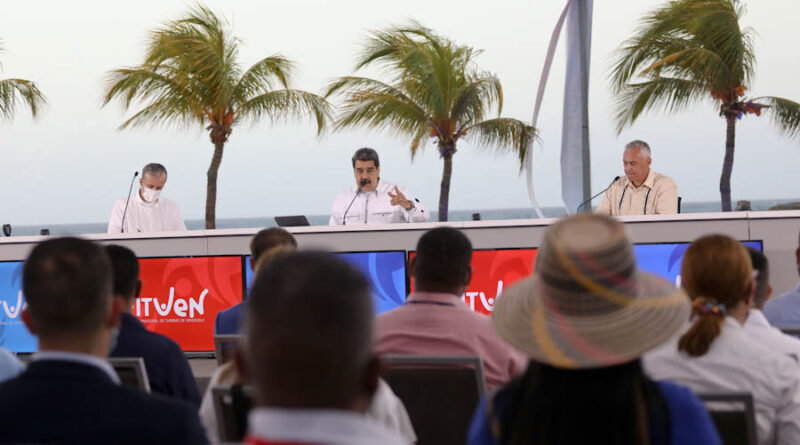 On Thursday, December 16, the President of Venezuela, Nicolás Maduro, revealed that a plan is being developed to start mining of certain minerals, without specifying which ones, that will represent a substantial contribution to the national income.

The president stated this during the Closing Act of the 14th Edition of FITVEN La Guaira 2021, where he affirmed that Venezuela will not depend only on oil revenue to add wealth to the country. FITVEN is the annual tourism fair organized by the Venezuelan government to showcase Venezuela’s tourism potential.

“I refuse that we continue depending [on oil],” said the Venezuelan head of state. “The oil that Venezuela produces, that she grows, that she contributes to the market, but tourism as well must be developed, plus the basic industries of Guayana (South), the production of gold, diamonds… and other minerals must play a part. I will not specify how much, but they must contribute a lot to the country soon, and in secret.”

In this sense, the president explained that these are “strategic minerals for peaceful purposes” that have nothing to do with nuclear energy and which, he stressed, will bring a lot of revenue to Venezuela.

Finally, President Maduro stressed that income from tourism should bring profits for the years to come and announced a project for investments in tourism in the island of La Tortuga, for which he anticipated that a three-month presentation period will be opened to showcase the plan, which he assured is “powerful.”

“Venezuela has a wonderful project,” commented President Maduro. “Venezuela has an island, La Tortuga, and it is prime for investment to promote ecological tourism… We are going to open a three-month period to present La Tortuga development project, which is a powerful project. It is an island larger than Aruba and it will be an island dedicated to receptive tourism. I leave it to you investors.”

He added that Venezuela currently has the Anti-Blockade Law to protect the investments completely.