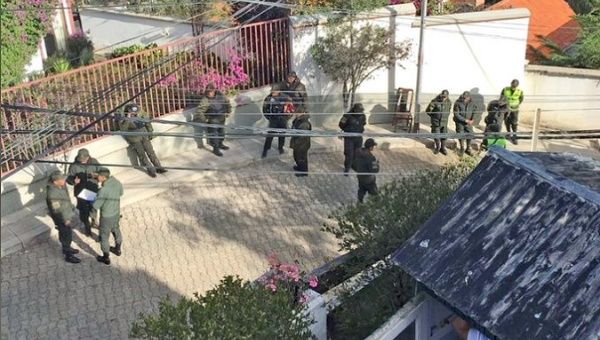 The harassment and intimidation carried out by the de facto government of Jeanine Áñez on the official residence of Mexico in Bolivia include the use of drones flying over the property to monitor activities inside.

Yesterday afternoon, the diplomatic delegation, headed by Ambassador María Teresa Mercado Pérez, denounced via Twitter the use of remote control technology, as well as the persistent surveillance of the Mexican diplomatic headquarters by civilians and elements of the Bolivian police, who even took photographs.

The Mexican delegation in La Paz published a series of images and a video showing the flying device. Later, it reported on that social network that security and civil bodies continued to surround the residence inhabited by Mercado Pérez and where nine members of the former government of the exiled president Evo Morales are staying.

The agents guarding the building are installed at various points in the vicinity, including on the top of a hill. A picture posted on Twitter shows a police officer holding an electronic device at face level to take pictures.

Despite Mexico’s public condemnation that the police operation mounted by Bolivian authorities is out of all proportion and represents a threat and a violation of the Vienna Convention on Diplomatic Relations (1963), the siege has in fact been increasing since Mexican officials in La Paz noticed the drones.

In addition, on Friday, police officers stopped vehicles with diplomatic plates belonging to the Spanish embassy’s chargé d’affaires, Cristina Borreguero, and the Spanish consul in Bolivia, Alvaro Fernandez, who were paying a courtesy visit to Mercado Perez, the Foreign Ministry reported.

Exiled President Evo Morales had already denounced on Twitter the use of drones to intimidate and risk the safety of asylum seekers. He also said that this violates the airspace of the Mexican diplomatic office.

Among the asylum seekers who are in the official residence are the Ministers of the Presidency, Juan Ramon Quintana, and of Culture, Wilma Alanoca, people that the de facto government of Áñez is trying to apprehend.

Karen Longaric, the Bolivian regime’s foreign minister, has even demanded in various public forums that the government of President Andrés Manuel López Obrador hand over the asylum seekers who are accused of common crimes and has stated that they will not be granted safe conduct.