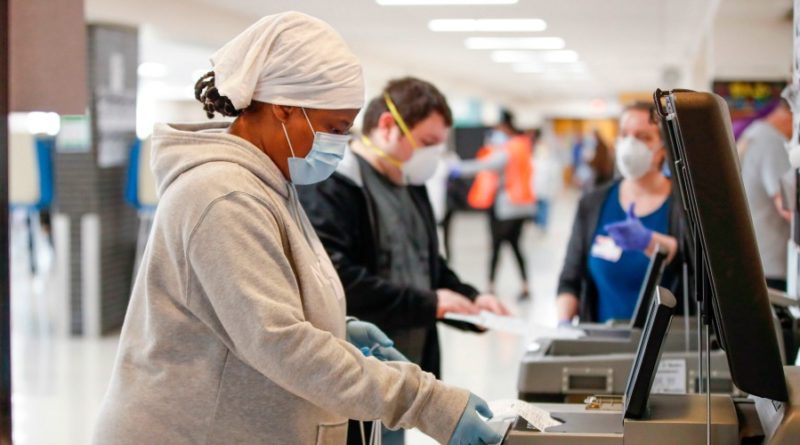 “We will use every tool in our arsenal to block efforts aimed at discouraging participation by eligible voters this election season.”

Civil rights groups are vowing to fight back against what they are calling a nationwide voter intimidation and suppression campaign by the national Republican Party and President Donald Trump that could have a “chilling effect” on voting rights and November turnout.

The New York Times reported Monday that the Republican National Committee, President Donald Trump’s 2020 reelection campaign, and right-wing advocacy groups are “mounting an aggressive national effort to shape who gets to vote in November—and whose ballots are counted.”

“In the midst of a national health crisis like the Covid-19 pandemic, Americans of every political party should be working to make voting as safe and fair as possible. Regrettably that is not the course taken by the Republican Party.”
—Karen Hobert Flynn, Common Cause

“The Republican program, which has gained steam in recent weeks, envisions recruiting up to 50,000 volunteers in 15 key states to monitor polling places and challenge ballots and voters deemed suspicious,” according to the Times. “That is part of a $20 million plan that also allots millions to challenge lawsuits by Democrats and voting-rights advocates seeking to loosen state restrictions on balloting.”

Earlier this month, Politico reported that “more than two dozen Republican operatives” are coordinating with state and local GOP officials to fight efforts to expand vote-by-mail, which advocates say is necessary to safely conduct the November elections amid the coronavirus pandemic. Trump has opposed vote-by-mail, saying in March that “you’d never have a Republican elected in this country again” if mail-in voting is expanded.

In a joint statement Monday evening, advocacy groups Common Cause and the Lawyers’ Committee for Civil Rights Under Law said they plan to do everything in their power to stop the GOP’s massive “vote suppression push” disguised as an effort to combat the mythical scourge of voter fraud.

“These efforts hearken back to so-called ‘ballot security’ programs that were found unlawful and led to court-ordered injunctions prohibiting their implementation,” said Kristen Clarke, president and executive director of the Lawyers’ Committee. “We will use every tool in our arsenal to block efforts aimed at discouraging participation by eligible voters this election season.”

As The Atlantic’s Vann R. Newkirk II wrote at the time, the consent decree was born out of a DNC lawsuit accusing the RNC of deploying “off-duty cops to patrol majority-minority precincts, wearing ‘National Ballot Security Task Force’ armbands.”

Karen Hobert Flynn, president of Common Cause, said in a statement that her group and other activists “intend to fight every effort to suppress any American’s voting rights” now that the RNC is once again free to engage in aggressive voter intimidation campaigns.

“In the midst of a national health crisis like the Covid-19 pandemic, Americans of every political party should be working to make voting as safe and fair as possible,” said Flynn. “Regrettably that is not the course taken by the Republican Party which has chosen to try to take advantage of a pandemic for partisan political gain.”

Featured image: A woman casts her ballot in a presidential primary election at the Hamilton High School in Milwaukee, Wisconsin, on April 7, 2020. (Photo: Kamil Krzaczynski/AFP via Getty Images)