IN THE WEEKS BEFORE THE 2016 PRESIDENTIAL ELECTION, the most powerful former leaders of the Central Intelligence Agency did everything they could to elect Hillary Clinton and defeat Donald Trump. President Obama’s former acting CIA chief Michael Morrell published a full-throated endorsement of Clinton in the New York Times and claimed “Putin ha[s] recruited Mr. Trump as an unwitting agent of the Russian Federation,” while George W. Bush’s post-9/11 CIA and NSA Chief, Gen. Michael Hayden, writing in the Washington Post, refrained from endorsing Clinton outright but echoed Morrell by accusing Trump of being a “useful fool, some naif, manipulated by Moscow” and sounding “a little bit the conspiratorial Marxist.” Meanwhile, the intelligence community under James Clapper and John Brennan fed morsels to both the Obama DOJ and the U.S. media to suggest a Trump/Russia conspiracy and fuel what became the Russiagate investigation.

In his extraordinary election-advocating Op-Ed, Gen. Hayden, Bush/Cheney’s CIA Chief, candidly explained the reasons for the CIA’s antipathy for Trump: namely, the GOP candidate’s stated opposition to allowing CIA regime change efforts in Syria to expand as well as his opposition to arming Ukrainians with lethal weapons to fight Russia (supposedly “pro-Putin” positions which, we are now all supposed to forget, Obama largely shared).

RELATED CONTENT: Colombian Government Admitted its Involvement in Failed Mercenary Operation in Venezuela – Investigating Leakers and Not the Criminals

As has been true since President Harry Truman’s creation of the CIA after World War II, interfering in other countries and dictating or changing their governments — through campaigns of mass murder, military coups, arming guerrilla groups, the abolition of democracy, systemic disinformation, and the imposition of savage despots — is regarded as a divine right, inherent to American exceptionalism. Anyone who questions that or, worse, opposes it and seeks to impede it (as the CIA perceived Trump was) is of suspect loyalties at best.

The CIA’s antipathy toward Trump continued after his election victory. The agency became the primary vector for anonymous, illegal leaks designed to depict Trump as a Kremlin agent and/or blackmail victim. It worked to ensure the leak of the Steele dossier that clouded at least the first two years of Trump’s presidency. It drove the scam Russiagate conspiracy theories. And before Trump was even inaugurated, open warfare erupted between the president-elect and the agency to the point where Democratic Senate Majority Leader Chuck Schumer explicitly warned Trump on the Rachel Maddow Show that he was risking full-on subversion of his presidency by the agency:

This turned out to be one of the most prescient and important (and creepy) statements of the Trump presidency: from Chuck Schumer to Rachel Maddow – in early January, 2017, before Trump was even inaugurated: pic.twitter.com/TUaYkksILG

Democrats, early in Trump’s presidency, saw clearly that the CIA had become one of Trump’s most devoted enemies, and thus began viewing them as a valuable ally. Leading out-of-power Democratic foreign policy elites from the Obama administration and Clinton campaign joined forces not only with Bush/Cheney neocons but also former CIA officials to create new foreign policy advocacy groups designed to malign and undermine Trump and promote hawkish confrontation with nuclear-armed Russia. Meanwhile, other ex-CIA and Homeland Security officials, such as John Brennan and James Clapper, became beloved liberal celebrities by being hired by MSNBC and CNN to deliver liberal-pleasing anti-Trump messaging that, on a virtually daily basis, masqueraded as news.

The all-consuming Russiagate narrative that dominated the first three years of Trump’s presidency further served to elevate the CIA as a noble and admirable institution while whitewashing its grotesque history. Liberal conventional wisdom held that Russian Facebook ads, Twitter bots and the hacking and release of authentic, incriminating DNC emails was some sort of unprecedented, off-the-charts, out-of-the-ordinary crime-of-the-century attack, with several leading Democrats (including Hillary Clinton) actually comparing it to 9/11 and Pearl Harbor. The level of historical ignorance and/or jingostic American exceptionalism necessary to believe this is impossible to describe. Compared to what the CIA has done to dozens of other countries since the end of World War II, and what it continues to do, watching Americans cast Russian interference in the 2016 election through online bots and email hacking (even if one believes every claim made about it) as some sort of unique and unprecedented crime against democracy is staggering. Set against what the CIA has done and continues to do to “interfere” in the domestic affairs of other countries — including Russia — the 2016 election was, at most, par for the course for international affairs and, more accurately, a trivial and ordinary act in the context of CIA interference.
This propaganda was sustainable because the recent history and the current function of the CIA has largely been suppressed. Thankfully, a just-released book by journalist Vincent Bevins — who spent years as a foreign correspondent covering two countries still marred by brutal CIA interference: Brazil for the Los Angeles Times and Indonesia for the Washington Post — provides one of the best, most informative and most illuminating histories yet of this agency and the way it has shaped the actual, rather than the propagandistic, U.S. role in the world. 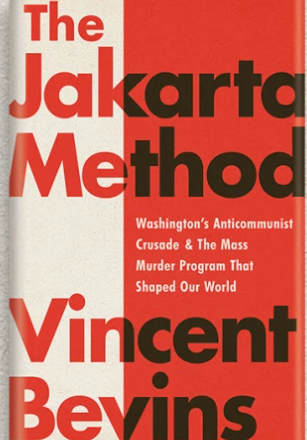 Entitled “The Jakarta Method: Washington’s Anticommunist Crusade and the Mass Murder Program that Shaped Our World,” the book primarily documents the indescribably horrific campaigns of mass murder and genocide the CIA sponsored in Indonesia as an instrument for destroying a non-aligned movement of nations who would be loyal to neither Washington nor Moscow. Critically, Bevins documents how the chilling success of that morally grotesque campaign led to its being barely discussed in U.S. discourse, but then also serving as the foundation and model for clandestine CIA interference campaigns in multiple other countries from Guatemala, Chile and Brazil to the Philippines, Vietnam and Central America: the Jakarta Method.

Our newest episode of SYSTEM UPDATE, which debuts today at 2:00 p.m. on The Intercept’s YouTube channel, is devoted to a discussion of why this history is so vital: not just for understanding the current international political order but also for distinguishing between fact and fiction in our contemporary political discourse. In addition to my own observations on this topic, I speak to Bevins about his book, about what the CIA really is and how it has shaped the world we still inhabit, and why a genuine understanding of both international and domestic politics is impossible without a clear grasp on this story.