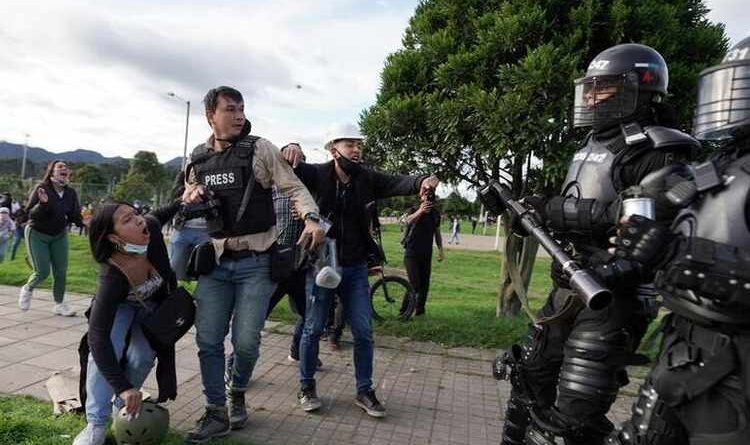 A report prepared by representatives of social organizations and human rights activists from 13 countries warns about the serious repression unleashed in Colombia, while calling for an urgent halt to the sale of European weapons to the government of right-wing President Iván Duque.

The savage repression against demonstrators on Colombian soil already has international witnesses. After carrying out an on-site verification, 41 representatives of social and human rights organizations from 13 countries have just launched a report in which they warn about the serious violations perpetrated by the Duque government. The report reveals police violence is combined with the illegal actions of paramilitary gangs resulting in torture, deaths, and disappearances.

“We have to keep our eyes on Colombia. There is a logic of repression as if it were a war, and the consequences can be terrible. We must not leave them alone,” said Lorea Undagoitia, member of the Basque organization Mugarik Gabe in Bilbao, after nine days in Colombia, where repression against anti-government strikes and demonstrations has persisted for over two months.

Undagoitia was part of the international mission SOS Colombia, which also included representatives of the International Secretariat of the Comisiones Obreras trade union, as well as the Center for Peace Studies of Catalonia, the US organization Amazon Frontlines, the National Network of Women Human Rights Defenders of Mexico, and the Vatican’s Dicastery for Promoting Integral Human Development, among others.

The preliminary report reflects the horror that Colombia has been suffering since the Duque government decided to launch a violent repressive response to the protests. In this regard, the mission documented approximately 180 direct reports of “physical aggressions, persecution, harassment and violation of human rights in the framework of the National Strike” that has mobilized thousands of people in different parts of the country.

By way of context, the organizations emphasize that the mobilizations “can be traced back to a structural socioeconomic crisis with high unemployment rates, increased poverty, and extreme poverty. In addition, social precariousness worsened during the COVID-19 pandemic, during which time the government did little to guarantee the coverage of the basic needs of citizens, such as access to food, health, decent housing, and basic income.”

Along with this, “violence against peace signatories and human rights defenders in Colombia has increased significantly since the signing of the Peace Agreement with the Revolutionary Armed Forces of Colombia-People’s Army (FARC-EP) in 2016.”

The document provides shocking data on the crimes committed over the past five years: “According to the UN there were more than 400 murders of human rights defenders in Colombia between January 2016 and December 2020, approximately 120 murders in 2020, and at least 71 murders so far in 2021, including 49 between March 27 and June 25, 2021.”

After holding interviews with different organizations and hearing firsthand the testimony of victims of repression, the participants in the international mission concluded that the main perpetrators of the violations that are reported recently are the police forces—especially ESMAD, the feared anti-riot squad of Colombia—as well as “illegal armed groups” and “armed civilians acting in paramilitary collusion with the security forces.”

When establishing the “patterns of human rights violations” registered since April 28, the report speaks of “selective homicides,” “personal injuries,” “torture, cruel, inhuman and degrading treatment,” and also “eye injuries” and “aggressions with firearms.” It also warns of cases of “sexual violence and torture,” “arbitrary and illegal detentions,” forced disappearances and “stigmatization, singling out and persecution.”

Beyond the usual images of police charging demonstrators in cities such as Bogotá or Medellin, the international mission also highlights the drama being played out in different parts of the country at the hands of paramilitary gangs. In regions such as Valle del Cauca, Nariño, Antioquia, Santander and Eje Cafetero, among others, the phenomenon of urban and rural paramilitarism has been identified. “Some of these groups attack demonstrators with long- and short-range firearms,” states the report.

Based on “reliable sources of information” obtained on the ground, the international representatives warn about “the consolidation of a criminal plan whose objective is to generate terror and, in most cases, the eventual murder of young people who belong to social and popular movements that congregate at the different points of resistance of the National Strike.”

Likewise, “it has been noted that the great majority of the victims are afraid to publicly come forward, in fear of being arbitrarily targeted, persecuted, harassed, and even murdered,” the authors relate. “Faced with this landscape, the right of access to real justice with established constitutional guarantees is completely diluted and non existent”.

International denunciation
A few hours after returning home, Undagoitia pointed to this lack of guarantees as one of the fundamental reasons for the “final objective” of the mission: “to gather enough support and arguments to begin legal proceedings against the Colombian government in international spaces.”

“If we were to do so in Colombia,” he added, “it would only serve to endanger the complainants.”

The Inter-American Court of Human Rights, which in a recent report has warned about “the disproportionate use of force, gender-based violence, ethnic-racial violence, violence against journalists and against medical missions” in Colombia, appears on the roadmap of the international mission, which also plans to take its complaints to parliaments and governments of different countries. “We want to get commitments,” says the representative of Mugarik Gabe.

Arms sales
Likewise, they are demanding that the European Union immediately stop the “sale of military weapons and anti-riot material” to the Colombian government. According to official data, Spain is among the primary sellers of weaponry to Colombia’s Armed Forces.