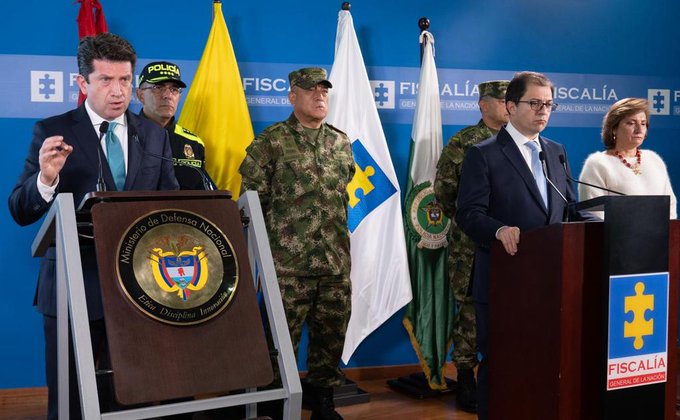 Colombian authorities claimed that rebels of the Revolutionary Armed Forces of Colombia (FARC), allegedly following orders from Venezuela, directed the attack against President Iván Duque reported on June 25 in Cúcuta, while he was traveling in a helicopter.

It is worth noting that the new accusation of Caracas by the Duque government arose after the Minister of Defense and the Prosecutor’s Office revealed the conclusions of the investigation into the alleged attack on the helicopter, and an attack on Brigade 30 of the Colombian National Police, both concluded on the same day in Cúcuta.

“With all the provocative material it is clear that these attacks against the president and against Brigade 30 were planned from Venezuela, and therefore it is necessary to open a discussion with the international community about how the regime of the president of Venezuela, Nicolás Maduro, that continues to harbor terrorists, is where attacks on Colombian institutions are planned from,” said Colombia’s Minister of Defense Diego Molano, without providing further details.

The accusation was a thinly disguised attempt to divert attention from the sinister role Colombia played in the assassination of Haiti’s President Jovenel Moïse, and provided further evidence of Colombia’s strategy of sowing discord with mercenaries and paramilitary violence across Latin America and the Caribbean.

At the same press conference the Attorney General of Colombia, Francisco Barbosa, claimed that “the investigative team obtained material and technical evidence revealing that the FARC’s 33rd Front, whose leader is known as John Mechas, is behind the two events.”

Let us recall that the government of Colombia, an expert in manufacturing fake news and smokescreens, has been trying in recent months to generate a new casus belli, that is, a reason for war against Venezuela.

In the ongoing falsos positivos (false positives) scandal, the Colombian Armed Forces lured poor and mentally impaired civilians into remote areas of the country, murdered them and claimed that their corpses belonged to guerrillas killed in battle. Up to 10,000 Colombians were killed in this manner between 2002 and 2010 alone.

Here we go again! From the makers of operation Gideon, Cúcuta Aid, Drone attacks, Apure paramilitary violence, etc! Now with a new trend: Venezuela attacking Colombia. What on earth they are thinking? Who would care of a puppet president in Colombia with zero relevance? https://t.co/RYIbQ3wOY3

The darkest machinations directed against the stability of Venezuela have originated from this neighboring country. These attacks include the failed drone assassination of President Maduro (August 2018), an unauthorized incursion attempt under the pretense of introducing humanitarian aid through Cúcuta (February 2019), an invasion with paramilitary and mercenary forces known as Operation Gideon (May 2020), the asymmetric warfare campaign in Apure state with Colombian paramilitary groups (which began in March 2021) and the recently confirmed links between Colombia and Cota 905 criminal paramilitary gangs in the plan called La Fiesta de Caracas.

Diosdado Cabello cautious
For PSUV deputy Diosdado Cabello, the alleged helicopter attack “makes one wonder,” as it could have been engineered to divert attention “while the assassination of the president of a country (Jovenel Moïse) was being planned from Colombia.”

“You remember that days ago there was an alleged attack on Mr. Duque’s helicopter,” said Cabello during his regular televised program Con el Mazo Dando. “Everything was so strange, and suddenly they said that there were rifles that had the Venezuelan army’s insignia on them, and that they immediately grabbed some guys three kilometers from the site. Some people said that the gunshots appeared to have been fired downwards [instead of from the bottom-up]… That happened days before Haiti. It is not that one imagines the worst, but it does provide food for thought.”

Moïse was shot dead in his residence in the early morning of July 7. To date, 26 people have been arrested for their alleged connection to the event, including 18 Colombians accused of being part of the command that orchestrated the attack. One of them is the cousin of Diego Molano, Colombian minister of defense.