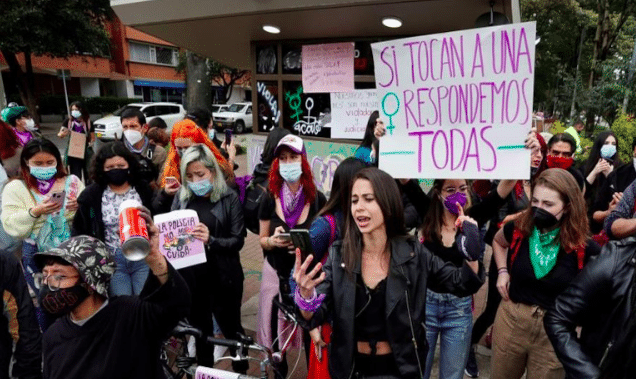 In addition to complaints of disproportionate use of military force, Human Rights groups initiated investigations of the sexual abuse of women by police forces during detention procedures .

The most visible case was that of a 17-year-old girl, who committed suicide after denouncing ESMAD [riot police] officials for sexually abusing her.

REDFIC assured, in a work published this Saturday, that there were additional victims. From April 28 to May 14, the Southwest region records:

In addition, a report by the NGO Temblores, reported 12 cases, bringing the total to at least 26 registered complaints of sexual assaults by ESMAD agents.

What is considered sexual abuse?
According to the report presented by different NGOs, the main complaints indicate that police officers intimidate women with actions such as sexual touching, abusive sexual acts, insults, rape, and cruel and degrading treatment.

The situation worsens when the victims of violence are LGBTQ, because they are undetected or unreported.

“Women and feminized persons suffer multiple other human rights violations due to gender identity and their sexual orientation that, however, are hardly recorded,” stated REDFIC.

In this regard, REDFIC pointed out that it is not only women who are victims of police violence: “This police violence is differential and specifically hits women, girls, boys, and LGBTQ people, made invisible.”

Featured image: Women protesting in Colombia due to sexual assaults against women and LGBTQ protesters by police. Photo courtesy of RedRadioVE.