On Thursday, November 18, some members of the Colombian police used Nazi symbols at an event paying “tribute” to the German police, which generated strong controversy in Colombia. The incident occurred at the Simón Bolívar Police Academy in Tuluá, in the Valle del Cauca Department. In the photos, which went viral on social media, police officers are seen wearing the Nazi swastikas, and one officer even disguised as Adolf Hitler.

The Valle University Student and Youth Organization condemned the incident, expressing outrage at the Colombian police paying tribute to the Nazi police and army. Similarly, environmentalist Oscar Estupiñán considered it extremely serious that the Colombian police acted as Nazi apologist, which harms not only Jewish people but also Germans, and is disrespectful to Colombia itself. 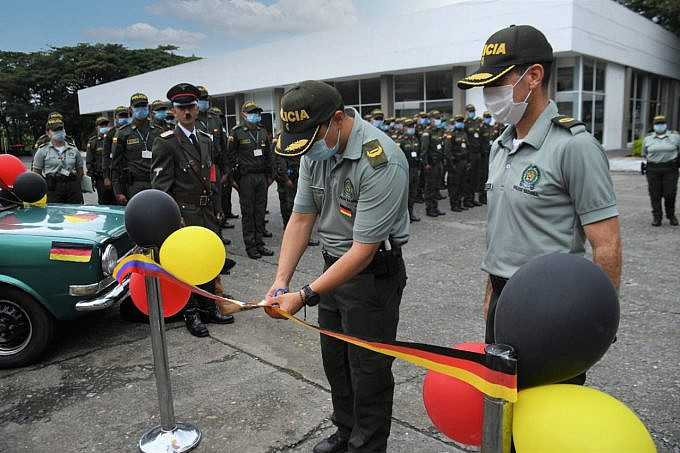 Journalist Luis Alfonso Mena expressed his outrage in a tweet: “Measures to chastise mid-level officials in the police are not enough. What happened today in Tuluá reflects the extreme right-wing Nazi-fascist ideology that inspires the ‘training’ manuals of police and military in Colombia. The Minister of Defense and the National Director of the Police should respond!”

Moreover, Israeli and German embassies in Colombia issued a joint statement condemned the use of Nazi symbols at the Simón Bolívar Police Academy event.

After the scandal, the National Police Academy Directorate, which is attached to the Ministry of Defense, explained in a statement that “in a wrongful manner and without consultation, a pedagogical activity based on world history was carried out… in which students from that police academy recreated scenes allusive to the Nazi period in Germany.”

The directorate statement also remarked that “the [Colombian] National Police denounces, with the greatest vehemence, the decision taken at that Police Academy. These are acts that go against our institutional policy of absolute respect for human rights.”

The Directorate statement stressed that the use of Nazi emblems and that the caricaturization of police uniforms are unacceptable. The statement also affirmed that decision had been taken to remove the director of the Simón Bolívar Police Academy immediately and to offer a public apology to the Jewish community and to all those who have been hurt by the unfortunate event that occurred in Tuluá.

Colombian President Iván Duque condemned the incident and asserted that “any praise of Nazism is unacceptable, and I condemn any manifestation that makes use of or reference to symbols alluding to those who were responsible for the Jewish holocaust which claimed the lives of more than six million people. Anti-Semitism has no place in the world.”

Meanwhile in Venezuela, journalist and Venezuelan Minister for Culture, Ernesto Villegas, also repudiated the incident. In a statement on Twitter, Villegas wrote, “The Colombian Police tribute to Germany included swastikas, Hitler costumes and other Nazi ‘niceties.’ They did this in a school that bears the name Simón Bolívar, although Santander would have been a more suitable name. Heil Uribe!”