The history of mankind is full of empires, empires of all kinds. All of them diverse and complex, and the only indisputable thing about them is that, despite their arrogance, they are not eternal as they pretend to be, because in the end they disappear one after the other in different ways. And, what is more, because none of them lasts even a thousand years, as promised by German Nazism (which barely lasted 13 years) and as the arrogant American empire has been proclaiming since the beginning of the 21st century. (Actually, only the Byzantine empire managed to last a thousand years, perhaps because, although it was already threatened, it never set out to achieve such a distant goal).

And how do empires collapse? For a long time it was preferred to explain their collapse as a result of aggressions or invasions. Now more emphasis is placed on their internal collapse. However, most often both components—internal collapse and aggression or invasions—coexist and reinforce each other, so that the question in each case is to determine which of them played (or plays) the main role. And in the case of the current empire it is clear that it is the internal collapse.

However, one thing is a regional empire, as were those of the old or distant past, and quite another a world empire like the modern ones, be they of the recent past or, above all, the one that is crushing this world today. Regional empires, no matter how big they were—and there were huge ones, could disappear without the rest of the world knowing about it, or the rest of the world only received late and confusing information of no importance. Nothing strange, because in those pre-industrial centuries the planet was not yet one, since the continents were not integrated, the land distances were enormous, the oceans difficult to cross, and cultural contacts between continents or distant countries were usually rare, late, or non-existent.

But, as we know, the capitalism that has dominated the planet for at least six centuries is a universal system of domination, and the capitalist empires, especially the most recent ones, always racist and warlike, have been ever larger, more powerful, and more universal. And their inevitable decadence and collapse affect a large part of the planet, as was the case of the Spanish empire in the 19th century, or the entire planet, as was the recent case of the British empire in the 20th century, and as is especially the case today, that of the US empire. The collapse of the British empire, with the underhanded help of the United States, was absorbed by the Second World War and the crisis of the old colonialism that followed it. But the case that we are living today, that of the growing decadence of the universal empire that is the US, is of special importance not only because of its size and its enormous political, economic, financial, military, media and cultural power over the world, but also because any world empire in decline, especially such a militaristic and warlike one as is the US empire, as it rots from within, becomes more aggressive and threatening in an attempt to cover up that rot, facing any economic rivalry that accentuates its decadence and thus putting the planet on the brink of war and even of utter destruction. For example, compared to the nuclear weapons currently at the disposal of the US, and of those who could respond to its attacks, the two criminal atomic bombs that Truman dropped on Japan in 1945 would be reduced to a mere pair of modest rockets.

The internal disaster of the US is enormous and seems unstoppable. For the time being, turned into a rogue state, it is stealing oil. It steals it from Syria, hijacks Iranian oil tankers en route to Venezuela and appropriates the oil that Venezuela has paid for. But such petty larcenies would be mere imperial entertainments; Biden has bigger plans. The Keynesian-style domestic socio-economic plan that he recently got approved by Congress is a huge project that could have worked at another time or in another context. Now it is very difficult to make it work. Today, the US has too many problems that hinder this $1.2 trillion plan, which, by rebuilding the country’s battered internal infrastructure, which has been in ruins for decades (roads, highways, bridges, buses, trains, streets, dams, etc.),would create millions of jobs, and that is what seems to be provoking the accelerated increase of the enormous multitude of migrants from this Latin America fleeing their misery to the US, the main cause of it, increasing its border crisis and its pressure on Mexico to stop them. Moreover, what Biden intends with this ambitious plan is to finally overtake China, as if it were lying motionless in wait. Add to that the country’s unstoppable internal crisis, social decay, violence, the growing threat of secession, drugs, alcohol, racism, unemployment, strikes, the Republican threat and Biden’s declining support, and you get a better idea of the sheer size and depth of the crisis.

And to try to cover it up, the Biden administration can find nothing else to do but to attack and threaten China and Russia with daily military provocations; provocations that all point to a nuclear war that could start with any accidental clash and lead to disaster. The examples of this are shown to us daily in the mainstream press and are not worth quoting.

Meanwhile the world, starting with the servile Europe, continues to behave like what it is: an indifferent accomplice of the US. And it is not only Europe. It is that everyone looks the other way, nobody does anything. That is why the US does what it wants and runs over whoever it wants. The most deplorable example of this cowardly complicity is that of the useless UN. What is this costly and useless organization for? To listen to hypocritical, cynical or crawling speeches that set the tone, and also to the occasional decent or courageous speech that nobody takes into account? The indifference of this UN is even more shameful today, not because it is new, which it is not, but because it is now more servile and useless than at any other time due to the fact that we are closer every day to a possible nuclear war that could result from an irresponsible Yankee incident. We should ask Guterres, who has a crooked neck from looking the other way so as not to see anything that is happening, “Do you sleep, Mr. Secretary General? Did you get your salary this month, Mr. Secretary General?”

And the same should be asked of the other complacent and well-paid servants of the US, such as the head of the ICC who has just visited Venezuela to find out if human rights are being violated in Venezuela and then declares that Colombia, whose government massacres its people with impunity on a daily basis, is a model of respect for those rights. Nor is he thinking of asking the US government a few questions on that subject. Of course not. He would lose his job. And the same with the ineffable Mrs. Bachelet, award-winning repressor of the Mapuches who, like this representative of the ICC, no longer has a crooked neck, but it has turned backward like those imaginary medieval monsters who, because their heads or feet were pointed backward, seemed to be coming when in reality they were leaving. In this case to collect their succulent salaries for serving the empire.

And meanwhile, through the faded Biden or any of his officials, the US continues its irresponsible games on the brink of the abyss, threatening to unleash a nuclear clash the accidental—or who knows if provoked—onset of which may take us by surprise any of these days.

Featured image: Concert as part of protest demanding an end to the US war on Iraq. Photo: Bill Hackwell 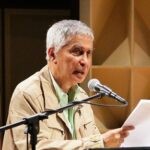