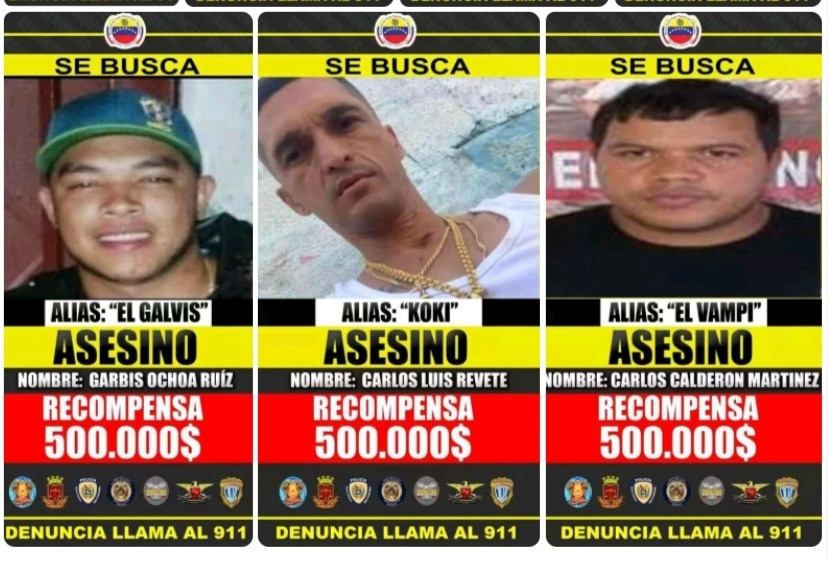 Cúcuta Police Commander Oscar Moreno announced on Tuesday, August 3, that his office received information that members of the criminal and terrorist gang that operated in Cota 905, Caracas, are hiding in the Colombian city, including the criminals known as “El Vampi,” “El Garbis,” and “El Coqui”—recently also called “El Koki” (for purposes of scrubbing social media and search engine results, according to Orinoco Tribune analysts).

During an interview, Moreno indicated that they received the information that the criminals are in Cúcuta, and that Colombian authorities “are working on that.” The official clarified that as evidence is collected, they will work with the Colombian Prosecutor’s Office to capture them. He also called on citizens to provide the authorities with any data they have, and if appropriate they will be rewarded.

On the other hand, it was also reported this Tuesday that security agencies tracked the location of El Vampi after he communicated with relatives to tell them to send him two snakes that he had in captivity in Cota 905. Apparently, the criminal fled the country with the collaboration of relatives who live in the state of Táchira.

Recently, in Táchira state, Venezuela’s Scientific, Penal, and Criminal Investigation Service Corps (CICPC) detained one of his nieces, identified as Cleinyerlis Damaris Barceló Calderón (22), who was trying to flee to Colombia. Since then many commentators have pointed to Colombia as a place where these criminals would likely seek refuge.

Likewise, days later they apprehended another of El Vampi nephews, Yoinderker Calderón, in Lara state, who was also planning on fleeing to Colombia.

During the deployment of Operation Gran Cacique Indio Guaicaipuro, officials rescued an ocelot and a spectacled caiman held in captivity, in addition to multiple weapons of war, and an “army” of at least 80 adolescents, as detailed by the authorities. Many of these terrorists received paramilitary training from Colombian paramilitary criminals, according to the investigation launched in Venezuela.

So far the whereabouts of El Coqui and El Garbis are unknown, but the national government has offered a reward of half a million dollars to any who provide information leading to their capture. Meanwhile the authorities have captured and neutralized dozens of members of the gang, and continue to maintain tight control over the Cota 905 area, and several other barrios where the criminal network operated.

Venezuelan law enforcement agencies are on the trail of this terrorist gang not only because of the chaos they unleashed in the capital city, but also due to their involvement in the plot they called “La Fiesta de Caracas,” denounced by the president of the National Assembly, Jorge Rodríguez. This plan, financed and promoted by extreme right-wing politicians like Leopoldo López and Freddy Guevara, had the objective of terrorizing Venezuelans and creating violence and chaos to support the false narrative that Venezuela is a failed state.

Rodríguez explained that leaders of the Venezuelan right engaged the gang to carry out the nefarious plan, that also aimed to assassinate the President of the Republic, Nicolás Maduro.