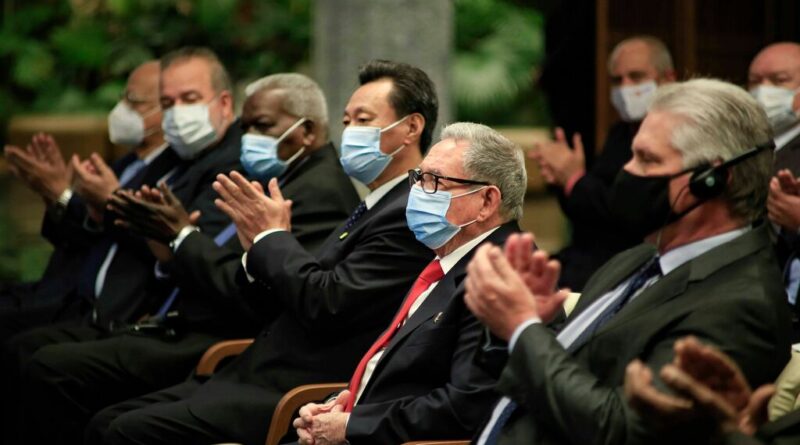 HAVANA, Cuba, Dec 12 (ACN) Army General Raúl Castro Ruz, First Secretary of the Central Committee of the Communist Party of Cuba (PCC), and Miguel Díaz-Canel Bermúdez, President of the Republic, headed this Friday the political-cultural event for the six decades of diplomatic relations with the Democratic People’s Republic of Korea (DPRK), held at the Palace of the Revolution in this capital.

Salvador Valdés Mesa, Vice President of Cuba, ratified the admiration and solidarity towards the Korean people who, as expressed by Commander in Chief Fidel Castro Ruz, never backed down in the battle for independence, against foreign oppression and exploitation.

The leader also highlighted the Cuban support to that sister country and its government in its efforts to build a prosperous socialism, for the reunification of its country, and for a peaceful and lasting solution for the whole peninsula.

Valdés Mesa recalled the DPRK’s support for Cuba during the October Crisis, known internationally as the Missile Crisis, and its heartfelt tribute after the death of the historic leader of the Cuban Revolution.

Despite the aggressions, the sanctions, and the economic, commercial and financial blockade by the United States, both territories have kept the flags of socialism high for a better future, he added.

Ma Shol Su, Ambassador of the Asian nation in Cuba, expressed that in more than half a century they have consolidated fraternal friendships and comradeship, facing challenges and difficulties of history, and in the same trench against imperialism.

The links between both countries are strengthened and are advancing according to the new era, thanks to the will and attention of their top leaders to continue that trajectory, with socialism as an ideal and luminous future of humanity, he added.

The diplomat highlighted the actions in Cuba to develop the economy in the face of the difficulties caused by hostile forces even in the midst of the COVID-19 pandemic, as does his country under the leadership of Kim Jong-un.

He called to continue expanding the fraternal bonds, established on August 29, 1960, in correspondence with the common interests, and to increase the collaboration for the well-being of all.

This year also marks the 75th anniversary of the founding of the Workers’ Party of Korea, a political organization that has successfully guided the people of Korea, and whose ties with the CPC are the foundation of friendship, solidarity and cooperation.