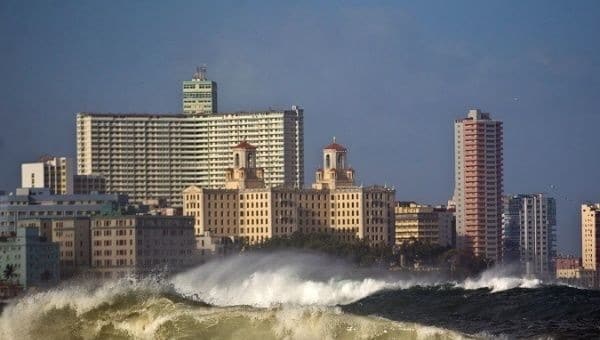 Strong winds and intense swells associated with a storm, which formed in Texas and moved towards the Gulf of Mexico Friday, left floods in Havana and the coastlines of western Cuba.

Despite the sun and clear skies in Havana, waves of four and five meters broke in the city’s pier, and the sea advanced hundreds of meters inland in the neighborhoods of Vedado and Miramar, where electricity was interrupted. “The north coast of Western Cuba affected by coastal floods. Havana’s downtown streets are under water. The Paseo del Prado, which is flooded by water near the Malecon, has been blocked for hours.”

The Cuban Minister of Foreign Affairs, Bruno Rodriguez, shared images on Twitter showing water from the sea covering the entrances to the Chancellery headquarters,  that is located some meters from the pier.

“The penetration of the sea has reached the Ministry of Foreign Affairs, at the moment there are no damages, all the preventive measures were taken, a group of our workers remains in the center and is helping the neighbors,” Rodriguez wrote.

So far, no victims have been reported.

Flooding on the northern and southern coasts of the island persisted into late Friday. According to the Insmet forecast, sea water should begin to gradually withdraw on Saturday.

Havana suffered the effects of another major disaster, in Sep. 2017, when Hurricane Irma caused flooding to the capital’s boardwalk and large portions of downtown’s neighborhoods, and El Vedado, causing significant damage.