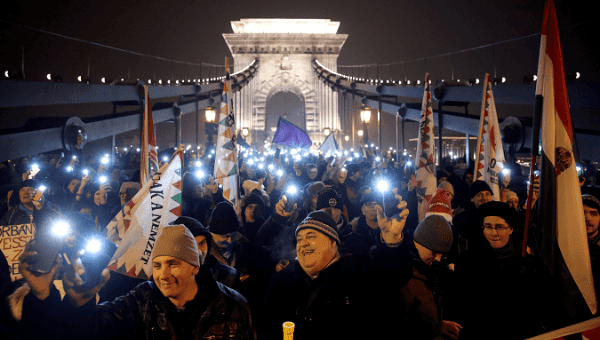 Recent reforms by the Fidesz government have provided a base for opposition forces and citizens to join against PM Orban, challenging his popularity.

Thousands of Hungarians marched to the presidential palace Friday night to protest against reforms to the labor code, known as the “slave law” and the creation of new courts under control by the executive branch, through the Ministry of Justice.

Approval of these two laws backed by far-right Prime Minister Viktor Orban and his Fidesz (Hungarian Civic Alliance) party angered a variety of groups. Last Sunday, 10,000 people protested against the reforms, arguing it went against the Hungarian.

Reforms to the labor code allow employers to ask staff to work up to 400 hours per year of overtime; these hours can be paid up to three years after having worked. The reform will go into effect on Jan. 1, 2019.

The second law, which sets up administrative courts, will allow executive controlled courts to take over cases involving everything from taxation and elections to corruption and police abuse. The bill also strips Hungary’s Supreme Court of its authority over these types of cases.

On Friday, a rally led by spoof political party The Two-Tailed Dog Party (MKKP), which started outside Parliament merged with a demonstration staged by opposition groups. MKKP, launched over a decade ago as a joke, has become a semi-serious force, using ironic humor to tackle practical issues.

“I wanted to come because I consider the Dog Party to be the most serious of all in the current lineup, which is rather sad,” said 26-year-old student Almos Edes.

Friday’s rally also took aim at regulations that have led to the departure of the Central European University, founded by Hungarian-born billionaire George Soros, from Budapest, and at demands for an independent public media.

Orban has said the protests have been partly stoked by activists paid by Soros, an accusation Soros’ Open Society Foundation has denied.

Protesters were subsequently joined by another rally called by opposition groups and then marched up to to the office of President Janos Ader, who the two controversial bills. During the march, protesters briefly blocked a bridge crossing the Danube River.

These most recent reforms by the Fidesz government have provided a stronger base for opposition forces and citizens to join against PM Orban, challenging his popularity. According to an AFP report, trade unions are discussing support for a potential nationwide strike to protest the labor reform.