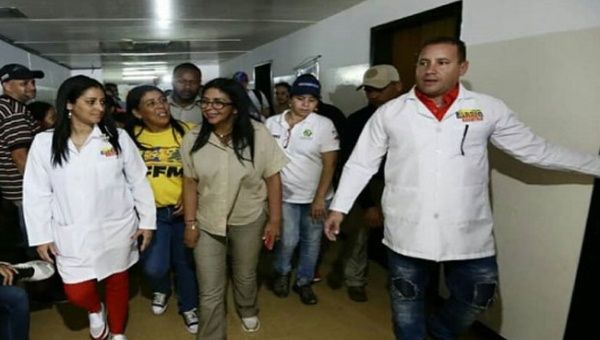 Several Cuban doctors made the trip to Venezuela this week in order to provide medical aid to the workers of the Electric Corporation of Venezuela (Corpoelec).

Many Cuban doctors who are members of the “Barrio Adentro” mission are attending to the workers of the Electric Corporation of Venezuela in order to help the people while they restore the Latin American nation´s power grid.

Vice President Delcy Rodriguez tweeted on Monday that this special medical care is being carried out on the instruction of Venezuelan President Nicolas Maduro.

Rodriguez thanked the Cuban doctors for their cooperation and willingness to aid the Venezuelan people in such a difficult time.

The Venezuelan Vice President tweeted her message while visiting with the Chief of Electric Staff of the Bolivar State as they recover from the successive sabotages.

Rodriguez said she visited a health service center in the Guri Camp where she oversaw many medical procedures taking place, including dental and pediatric work, and vaccinations.

The Vice President reportedly acknowledged the efforts of the electric workers as they work vigorously to restore the power grids to the people of Venezuela.

She also acknowledged the efforts of the National Bolivarian Armed Forces, who are also tirelessly working to not only protect the country, but also assist in these times of need.